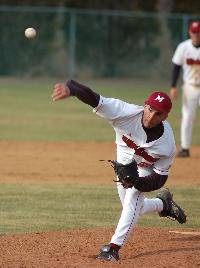 Bryan Adamski played the role of hero for the Massachusetts baseball team, using both his bat and his arm to bring down the Connecticut Huskies, 6-4, in 10 innings yesterday in Storrs, Conn.

The Minutemen (8-13, 3-5 A-10) took the lead in the top half of the 10th inning after Andy Tuetken – who led off with a double – scored on a throwing error by UConn third baseman Eric Turgeon on a sacrifice bunt that Adamski dropped down. The miscue allowed Adamski to reach third, and Ryan Franczek – who came into the game as a defensive replacement in the eighth – drove him in with a sacrifice fly.

Those two runs were all Adamski needed, as the 6-foot-4 senior came back out to the mound and shut down the Huskies (13-16) for the fourth consecutive inning. In those four innings of work, Adamski allowed just two hits and one walk, while striking out two en route to registering his second win of the season. He also finished 1-for-3 at the plate, with two runs scored, an RBI and two sacrifices.

UConn – now losers of four straight – had the Minutemen on the ropes in the eighth inning, leading 4-2, but could not hold on. Similar to the 10th, it was the combination of Tuetken, Adamski and an untimely Huskies error that enabled the Maroon and White to have a chance to win.

After Tuetken reached on an error by shortstop Dennis Donovan, Adamski followed with a single to put two on with no out. Junior captain Bryan Garrity came through after a Jim MacDonald pop out, driving in Tuetken to pull within one. Bill Rankin then tied the game with an RBI-groundout to second base.

The teams traded zeros in the ninth inning, with neither side putting up much of a threat. Freshman right-hander Will Musson registered the loss for the Huskies, allowing two runs – one earned – in his two innings of relief.

Fellow freshman Robert Van Woert started for UConn, recording a no-decision despite lasting for eight strong innings of work. His defense let him down throughout much of the game, as only one of the four runs he allowed was earned. Despite his strong start, Van Woert failed to register a single strikeout.

For UMass, Adamski came in as the fourth pitcher of the afternoon. Starter Jared Freni was solid in his three innings, striking out five and allowing just one run. Mitchell Eilenberg relieved Freni in the fourth but ran into trouble in both the fifth and sixth innings. An error by second baseman Cody Kauffman led to two unearned runs in the fifth and UConn added another run in the next inning to increase the lead to 4-2.

Just as Adamski closed out the game for the Minutemen, he was the one who got them started as well, when his RBI groundout scored Lou Proietti in the first inning. UConn countered with a run of its own in the third inning off Freni. Harold Brantley stole second after drawing a walk and then moved over to third on a balk. Dale Brannon knocked him in with a one out single up the middle.

Once again, Adamski was in the middle of things in the sixth, laying down a critical sacrifice bunt after Proietti and Adam Tempesta hit back-to-back singles to start the inning. Adamski’s bunt enabled Proietti to score on MacDonald’s groundout to third base, drawing the Minutemen to within one at the time.

Eli Rosenswaike can be reached at [email protected] Log onto the Daily Collegian’s sports blog at dailycollegiansports.blogspot.com for more coverage of all UMass sports.