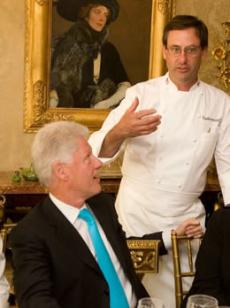 Fine dining came to the University of Massachusetts with the arrival of former White House chef Walter Scheib Wednesday night.

Scheib was the main White House chef for 11 years, working for President Bill Clinton and President George W. Bush. He served UMass students the favorite dishes of both presidents, such as sweet potato soup and penne pasta salad.

Scheib was invited to the event by the director of Dining Services, Ken Toong. Toong said he met Scheib at the National College and University Food Service Association (NACUFF) where Scheib was the special guest chef.

Toong saw this as a great opportunity to bring some positive coverage to UMass and a great meal to its students.

Toong was excited for UMass to be the first university in the nation to have Scheib come to cook for them.

Also, Toong saw the guest appearance as a way to encourage and excite the students.

“There is an image of what college dining hall food tastes like, we want to show that college eating is quite different now than in the past,” he said.

Another advance Toong sees for college dining halls is having chefs from different schools across the country come to UMass and to have UMass chefs go to other schools. There is a tentative contract in the works to switch chefs with schools such as College of the Holy Cross, Harvard University, University of California – Berkeley, University of Iowa and University of New Hampshire.

Toong says that he wants to make the dining hall more like a learning common. This could be made possible by having guests chefs explain to students what dishes they are serving, and in the case of Scheib, to tell stories of the dishes he made for the presidents and their families.

Guest chefs will come to the dining halls about once a month, said Toong.

“Quality is very important, lots of variety and diversity will help to make eating at UMass fun,” he said.

The guest chef series has previously welcomed Mai Pham, chef and owner of Lemon Grass Restaurant in California and chef and owner of El Naranjo located in southern Mexico, Iliana de la Vega. A chef who will be cooking with Alaskan Seafood is scheduled next.

Cory Greenfield can be reached at [email protected]