UMass back in hunt for national title 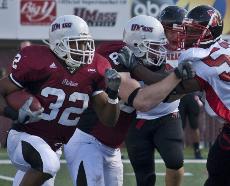 After losing to Appalachian State in the NCAA Division I Football National Championship game last year, the No. 7 Massachusetts football team is one step closer to returning to the title game this season.

UMass (10-2, 7-1 Colonial Athletic Association) defeated Fordham, 49-35, on Saturday at McGuirk Stadium in the opening round of the Football Championship Subdivision playoffs. The Minutemen travel to Carbondale, Ill. on Saturday to take on No. 4 Southern Illinois.

The winner of that second round game will face either No. 1 Northern Iowa or No. 13 Delaware in the semifinals on Dec. 8.

With the defensive struggles for the Minutemen against the Rams, Liam Coen, Matt Lawrence and Rasheed Rancher had career performances at just the right time.

Coen, the school record holder in virtually every passing category, eclipsed one of the few marks that he didn’t already own with his 419 passing yards against Fordham. The previous single-game high for a UMass signal-caller was 403, set by Matt Guice against New Hampshire in 2001.

It took Guice 63 passing attempts that game to crack the 400-yard mark, while Coen did it on 24-of-37 passing. Coen also has the third-highest single-game total with 401 yards against the Wildcats in 2005. The junior quarterback had 306 passing yards in the first half alone on Saturday. He finished the afternoon with four touchdown passes and did not turn the ball over.

Rancher had quite the first half as well, catching seven passes for 187 yards and two touchdowns before heading to the locker room before halftime. The 6-foot-5 wide receiver needed 24 yards in the second half to break the school record for most receiving yards in a game (Adrian Zullo 210, in 1999 against Richmond) but failed – catching one pass for 11 yards. He finished the game with 198 yards receiving on eight catches and also added an 11-yard run on an end-around.

J.J. Moore had a quiet yet effective game, hauling in eight catches for 115 yards. With that effort, Moore topped the 1,000-yard receiving mark on the season. He has 73 receptions with five resulting in a touchdown. He needs two catches to pass Kerry Taylor for third on the single-season receptions list, and his 1,006 yards receiving this year places him third for most in a season.

With the score tied at 35 early in the fourth quarter, it was Lawrence who started to take over. The senior tailback rushed for 124 yards after halftime, including 52 yards and a touchdown on the drive that produced the winning score. Lawrence finished with 167 yards and three touchdowns on 31 carries.

In his first season as a starting running back in college, Lawrence has amassed 1,473 rushing yards and 16 touchdowns in 12 games. He’s averaging 5.0 yards per carry on his 294 rushing attempts. Lawrence needs 73 yards to pass and move into fifth on the single-season UMass rushing list.

The Minutemen ended the game with 649 yards of total offense, finishing two yards short of the school record (651) set in 1965 against UNH. UMass had tied the record late in the fourth quarter after a 47-yard run by fullback Chris Zardas, but Coen lost two yards on consecutive kneel-downs to end the game.

Three mishaps on special teams helped the Rams stay close against the Minutemen on Saturday.

Unlike the next two miscues for the Minutemen, the first one came on the punt return unit. On fourth-and-2 on their own 26-yard line, the Rams faked the punt on a direct snap to linebacker Nicholas Magiera. Magiera took the snap and ran 38 yards down the field to the UMass 36-yard line. Quarterback scored on a 1-yard touchdown run to cut the lead to 14-7 in the first quarter.

It was the punting unit for the Minutemen that really struggled. In the second quarter with UMass leading, 21-7, Brett Arnold’s punt was blocked by Magiera. The blocked punt gave the Rams great field position and set up a touchdown pass to pull within seven points.

The final mistake that drew UMass coach Don Brown’s ire came late in the fourth quarter after the game was already in hand. The long snap was bobbled by Arnold, forcing him to scramble to his left and throw the ball to linebacker George Byrd. The pass was completed for a 6-yard loss.

After the game, Brown was pleased with the victory but was upset with the mistakes he saw on special teams.

“Very concerned, needs to be evaluated, will be evaluated,” Brown said after the game regarding his punting unit. “We have options. We have several guys who’ve been practicing there. I got to take a good hard look over the next 48 [hours], but I’m going to watch the tape and evaluate all pieces of it.”

Eli Rosenswaike can be reached at [email protected]