A Taste of Something Different 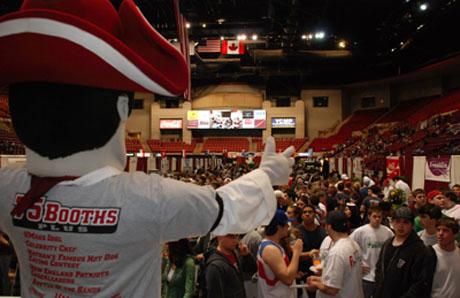 Tonight, when you head down to your local DC for your evening meal, don’t be surprised if you are turned away. No, there isn’t a strike. There hasn’t been a kitchen fire. The University hasn’t simply run out of food – quite the contrary, in fact. Tonight, University of Massachusetts Dining Services is pulling out all the stops, redirecting all their resources to the Mullins Center for an event they like to call, “Taste of UMass.”

Anyone who has had a meal on campus in the past few weeks has probably seen the flyers for this event, but many students haven’t given it much thought. Yes, it is a big event, but what motivation does the average student have to attend? Well, first off, all UMass Dining Commons will be closed from 3-9 p.m. Although Worcester and Berkshire will reopen at 9:00 p.m., those who cherish their regularly scheduled dinner time will have to hop on a bus to the Mullins Center. While that may be a good enough reason for many students, it does not have to be the only one.

“Taste of UMass” is an annual event put on by the University, and this year’s theme is “Global Dining, Smart Eating.” 75 different booths will be set up, featuring cuisine from Mexico, Spain, Vietnam and the Mediterranean, among other regions.

“The whole point of the event is to show off the power of the DCs to do something different, in a different venue,” said Ken Toong, Executive Director of Dining services at UMass. “There’s lots of healthy eating options, with small portions so you can try them all.”

Not all of the stations will be run by the school, however. Many local farmers and health food companies will have booths at the event, spreading the good word about local foods.

“One of our goals is to promote local eating,” said Toong. “Fresh flavors are very important.” Major distributors such as Tyson will also be in attendance, testing out new products on the UMass students. Being a guinea pig has never been so delicious.

For those who are not terribly enthusiastic about sampling food, the event will also be packed with entertainment. Many of the featured acts are centered on the culinary arts, such as demonstrations by celebrity chef Martin Yan on the science of stir-fry. Others, however, are purely for entertainment purposes.

The finals of UMass Idol will be held, as well as a battle of the bands, featuring four different student rock bands competing for prizes. Iron Chef UMass will also hold it’s finals at the event. While the Idol singing contest is a returning favorite this year, the Iron Chef competition is a newcomer, featuring four teams of three students, each team representing their respective dining hall. It will be moderated by “Iron Chef America” co-host Kevin Brauch, bringing a level of professionalism to the competition.

Also professionally-hosted will be the hot dog eating contest, sponsored by Nathan’s Famous Hot Dogs. Judged by an official Nathan’s MC, the contest will give its 12 participants 12 minutes to devour as many grilled wieners as possible. Any student brave enough to take down 16 or more will be eligible to go to Coney Island for the world’s largest professional eating competition.

The UMass Dining Services recently won the Restaurants and Institutions Magazine’s Ivy Award, given to institutions that demonstrate the highest standards of food service.

“We try hard to keep everyone happy” said Toong. “If you eat the same thing every night, you get bored, so we always try new things.” And they have certainly made strides towards that goal. Next year they plan to expand their chef exchange program to include a dozen universities from across the country, Mexico and Canada.

Taste of UMass is the single largest campus foodservice event in the nation and this year they expect to serve upwards of 8,000 people. The doors open at 4 p.m., and special busses will be transporting students to the Mullins center all evening. It is by far the largest dining event of the year on campus, and, in the words of Ken Toong, “it’ll be exciting. It’ll be fun.”

Andrew Sheridan can be reached at [email protected]