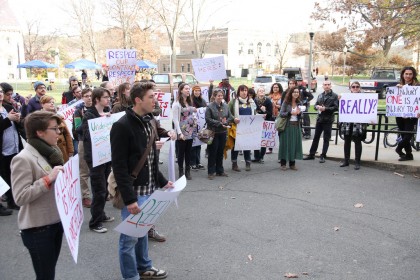 Undergraduate students are the lifeblood of UMass Amherst. We provide the funding and personnel that make the University run smoothly and constantly improve its standing as a top-tier public research university. However, undergraduates do not have full representation on the UMass Board of Trustees (BoT) and little representation in the UMass Faculty Senate. As the foundation of the University, and under the auspices that UMass exists for the students, undergraduates deserve a strong voice in the administration of the Amherst campus.

The Wellman Document, originally passed in 1973 to organize governance of the UMass System, outlines the specific governance responsibilities for students. In terms of student affairs, first, students have primary responsibility for services and activities designed to primarily serve students, or which are “financed primarily by students.” Second, student government manages student political affairs and organizational matters. Third, student government sets standards for student behavior. However, UMass defines ‘responsibility’ as, “the capacity to initiate recommendations, after appropriate consultation.”

The trustees wrote the Wellman Document at a time when student cost was much lower and the state picked up far more of the total cost. In 2013, 57 percent of the academic funding for UMass came from students and families, while only 43 percent came from the state. Students paid 43 percent in 2008 and far less in 1973.

UMass students have been fighting for the right to vote on what happens at UMass since 1991 when UMass Lowell and Dartmouth joined the system and the three student trustee votes turned into two votes rotating between the five campuses each year. Student representation on the UMass BoT is less than 11 percent; 17 of the 19 trustees are not students.

The Board of Trustees has explained the disparity away by saying that the opinions of the three non-voting members are taken into account when officials vote. A bill stuck in committee in the State House would provide voting rights to all five student trustees. The University’s position is that “all five student trustees have historically had a major impact on… decisions.”

Administrators have dominated policy regarding student conduct at UMass since my matriculation. The latest examples are the “tobacco-free” UMass policy and the cancellation of electronic dance music (EDM) events at the Mullins Center.

Neither a student referendum nor the SGA Senate authorized the prohibition of tobacco on-campus. The policy recommendation came from the Faculty Senate, which represents the 1,170 faculty members and not the 22,000 undergraduates. The University justifies the decision by stating that, “as a public institution of higher learning, UMass has an obligation to promote a healthful environment.”

The SGA passed a modification creating designated smoking areas on-campus in fall 2011 which would have created segregated gazebos for smokers. The administration rejected the modification and the ban went into effect in summer 2013 without any significant student input.

In addition, the University made the decision in September 2013 to cancel several EDM events at Mullins Center over concerns about recent overdoses on the party drug MDMA (a.k.a. ‘Molly’) and the drug-use-advocating lyrics of many EDM artists.

Undergraduates at UMass will always be the strongest advocates of other undergrads. Drawing up foolish distinctions between students through excessive pride and competition between academic departments, the false equivalence of the honors program with elitism, and the stigmatization of the student social culture only serves to reduce student power. Regardless of department, honors status, or achievement, we, the students, are UMass. Solidarity between students will enhance the ability to advocate for common goals like low tuition, high-quality non-academic programs and true student representation.

The SGA and Center for Educational Policy Advocacy (CEPA) are two primary organizations on campus that execute student governance and advocate for more student power, respectively. If you are interested in the advocacy and execution of great undergraduate governance at UMass, participate in these groups. Only through deep involvement and intense activism will undergrads be able to effect significant change on the University in four short years on-campus.