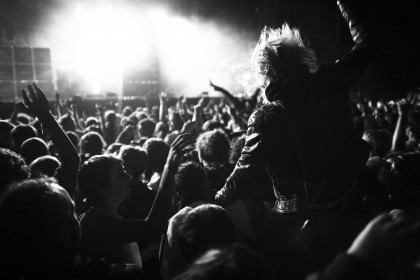 Twenty-five-year-old singer-songwriter Jhené Aiko began her steady rise into the realm of R&B and hip-hop early.

Born and raised in Los Angeles, Calif., she developed a deep passion for music at a young age. Her older sisters were part of the 1990s R&B group Gyrl, which eventually led Jhené to a meeting with music producer Chris Stokes.

Stokes knew that Jhené had talent at the age of five, and he signed her to Epic Records along with R&B group B2K. She was featured on recorded tracks from the band as well as releasing one of her own songs on the “B2K: The Remixes Vol. 1” album in 2002.

From there, Aiko went on to appear in various music videos and even had a few cameos on popular show soundtracks such as “The Proud Family” and “You Got Served.” By the time she was 15, Aiko had begun to dig out a niche for herself in the R&B industry. While she never released her self-titled album due to tensions with Epic Records, she continued to make music after leaving the record label to focus on motherhood and furthering her education.

In 2007, Aiko re-emerged in the industry with a renewed passion. When asked why she returned, she told SoulCulture that “I was innocently told to ‘sell’ myself when I walked into these meetings. That’s when I decided I would ‘sail’ myself rather than sell myself.”

Aiko also said she needed freedom in her music and style choices, which at the time she didn’t see as an option at Epic. After stepping back for a few years and taking time for herself and her family, she felt confident in what direction she wanted to move in and sought support from rappers she’d built relationships with in the pass.

In 2011, Aiko released her first mixtape “Sailing Souls” on her official website. Penning nearly all the songs herself, Aiko had total creative control for the first time in her career. With collaborations from artists such as Miguel, Drake and Kanye West, she began to see some of their clout rub off on her.

During this time she worked closely with producers and artists at independent record label Top Dawg Entertainment (TDE). TDE represents rappers like Ab-Soul, Schoolboy Q, Jay Rock and Kendrick Lamar, and the company continues to work with Aiko.

Aiko attracted publicity as her distinctive music spread, and by 2012 she caught the attention of Dion “No I.D.” Wilson, the vice president of Def Jam Records. Wilson eventually signed her to his imprint label Artium Records.

Her first single, “3:16AM,” off her Def Jam-released EP “Sail Out” was released on iTunes in September 2012. She toured with rapper Nas and Lauryn Hill on the “Life is Good/Black Rage” tour, performing songs from “Sailing Souls” as well as off her EP. Press from this tour led to her first Top 40 appearance with the help of Big Sean when she recorded the vocal hook for his hit “Beware.” Before this, Aiko had never gotten close to the Billboard Hot 100, but soon after the track was released she began to pick up a fan base.

On Nov. 12, Aiko released her debut EP “Sail Out.” The lead single off this album is titled “Bed Peace,” featuring Childish Gambino. The artwork for this single is a creative play on John Lennon and Yoko Ono’s “bed- ins” during the Vietnam War protests, and depicts Aiko and Gambino in the sheets with posters behind them.

Aiko’s soft and sultry voice allows for her to have pop-esque appeal when laid over her hip-hop centric beats. Jhené spearheaded the creative control of her recent EP, not willing to sell her soul to the record company’s desires. She cites Tupac among her influences for his controversial style, as well as artists such as Aaliyah, Eminem and Kendrick Lamar, a modern rapper she’s worked closely with over the past few years. She also touts Brandy Norwood, India Arie and Beyonce among her influences, saying she learned her vocal techniques from these accomplished powerhouse women.

Aiko may not have a full length album released yet, but with her musical network and unique contemporary R&B sound, she shows great promise as an artist. Critics have raved about her live performances, comparing her to Sade in her fluidity as she sings. “Sail Out” is definitely worth a listen if you’re interested in a more peaceful R&B sound. Give “Bed Peace” featuring Childish Gambino and “Stay Ready” featuring Kendrick Lamar a listen for some thoughtful lyricism and haunting tracks.