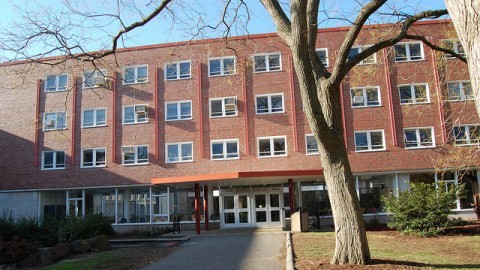 Bartlett Hall, home of the English, Journalism, Art History and Women, Gender, and Sexuality Studies departments, is slated for demolition and replacement by as early as 2016. As UMass continues its ongoing courtship with construction (the ramifications of such public affection being easily observable all around campus) the central bastion of humanities studies, built in 1959 as a champion of Modernist sensibilities, is next in line for the chopping block. It will be replaced by the New Academic Classroom Building (NACB) that is currently under construction next to Hasbrouck Laboratory and an as-of-yet unnamed facility near South College.

Critics of Bartlett would not (and will not) hesitate to point out the innumerable deficiencies of the building, which, as anyone can admit, is beginning to show its age. Bartlett is commonly bemoaned as a labyrinthine jumble of stairways, doorways, hallways and classrooms, thick with the musk of a bygone era. The floor plan is questionably arranged even to the most adept architectural navigator, and the building seems to sag under its own weight. Broken and boarded-up windows evoke Dickensian comparison as the temperature drops at night and in the winter; during the hotter months, the walls perceptibly drip with sweat (as do all those unfortunate enough to study within them, as anyone who has survived the experience can attest) and the interior temperature has been known to approach that of the sun.

Indeed, it is undeniable that poor Bartlett is in dire straits, but all British punk rock pioneers aside, the fate of the English department and its cohabitants is decidedly ambiguous. The journalism department is moving into the NACB, but the Women, Gender, and Sexuality Studies department, one of the smallest on campus, has not been awarded a temporary home and seems destined at this point for a rather nomadic transition. As for its much larger older sibling, the English department, the prospect of transition is even more worrisome: many times larger than its smaller brethren, uprooting the ancient behemoth from its territorial stomping grounds will be no easy task.

Setting the dizzying intricacies of construction and architectural development aside, there is, I think, something to be said about the sense of community that the ramshackle building has come to embody at this point. Sure, it’s a dilapidated, outmoded eyesore with a climate control problem and the strangest lavatory features in the history of bathrooms (seriously though, those urinals are an affront to mankind). It may be old, dirty and falling apart, but it’s home to some of the most incredible and talented people this university has ever seen, students and alumni both. At the risk of sounding old fashioned, it has character; and character is something that can’t be constructed in a mere four years.