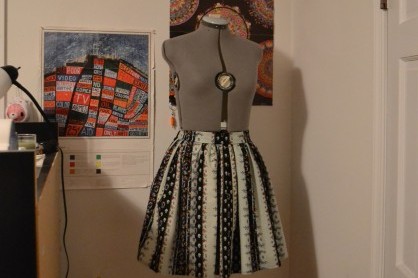 Alina Nalivayko is just your average University of Massachusetts senior – except that she runs a successful clothing business out of her bedroom.

A theater major with a focus in costumes, Nalivayko is also the owner of the Robotique, a virtual shop on Etsy.com that has made 240 sales.

Ranging from $8 to $90, the Robotique features clothing, accessories and home goods affordable on a college budget. Some of the more notable items include a made-to-order Pikachu hoodie ($85-90) and mustache pillow ($16). Nalivayko says that Pokémon- and mustache-themed items are the most popular in her store.

“I like Pokémon, so it’s fun to make,” she said, “but as a businessperson … I know that it’ll sell.” She is already working on two Pikachu hoodies and expects more orders as Christmas nears.

As for mustaches, they “used to be really big but they’ve kind of gotten less trendy this year.”

Another standout item is a “YOLO” wall portrait ($30), embroidered on felt and framed. “I got into felt art and typography kind of stuff a little while ago, and I would make that just because it was a fun artistic thing to do,” she said. Despite the popularity of the acronym, the portrait hasn’t been one of her strongest sellers.

Nalivayko’s foray into clothing design was sparked around the age of 13 by her interest in “nerdy stuff,” such as anime and comic conventions. After learning to sew by making her own costumes, she realized she could make money by creating and selling her work. She began with commissioned costumes but then moved on to smaller, less time-consuming pieces.

Since opening the shop in 2010, “it’s been surprisingly successful,” she said. “I make maybe a couple hundred dollars about a month – and that’s with no promotion. I put my stuff out there and [it draws people.]”

It wasn’t always so easy to bring in steady sales, however.

“I thought just opening a store and putting stuff up would generate revenue, but it didn’t,” she explained. “I had to get business cards. I had to sometimes sell at conventions or at craft shows and I’d have to advertise myself on Facebook and other sites … Once I did that, it was like night and day.”

As a student, it can be hard to manage an Etsy shop on top of classwork.

“I always value my Etsy store over school, which is really bad,” she says. “I know the holiday season is going to be really rough,” she adds, acknowledging that increased holiday shopping always coincides with finals week.

While Nalivayko has several friends who successfully manage Etsy shops full-time (and make a living doing so), she plans to keep the Robotique as a hobby. After college, her plan is to move to Chicago and apply for jobs and internships at local theaters. However, she said she will keep the option of running the shop full-time as a backup plan.

Although she enjoys making anime and video game inspired pieces, like Pokéball- and Animal Crossing-themed wristlets ($16 and $14, respectively), “I wish non-nerdy, non-specific things would be more profitable, because I like coming up with stuff on my own and doing what I like,” Nalivayko said. Once she has a successful full-time job, she hopes to focus the shop more on what she enjoys making and less on what is guaranteed to sell.

Jake Reed can be reached at [email protected]