Honors dorms have their ups and downs 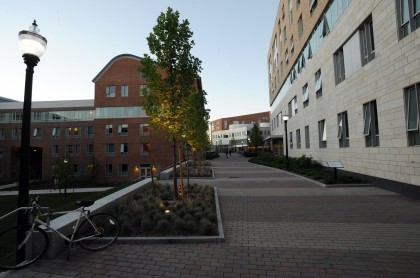 The new Commonwealth Honors College Residential Community (CHCRC) at UMass has received mixed reactions, both negative and positive. As a student living in the dorms, I have heard many students walking through the area complain about the new community: Unfair, elitist and “one-percent dorms” are just a few of the descriptions used to illustrate the residential area.

The CHCRC is an impressive sight to behold for the passing student, but its quality with respect to other residential areas is vastly overestimated. In fact, like every residential area, the CHCRC has both its pros and cons.

The suite style and apartment style housing in the upperclassmen dorms is one of the nicest aspects of the dorms. Suites are complete with a common room, a bathroom and any combination of double and/or single rooms. Apartments include a kitchen. While this design allows for more living space and privacy, it can also be stifling to student socialization. In other traditional dorms on campus, students on the same floor have to share bathrooms and are often in the hallways. I lived in a traditional double last year, and although sharing a bathroom with other students on my floor could be inconvenient, it was also an effective way of meeting the people who lived near me. In the upperclassmen CHCRC dorms, students have little incentive to leave their dorms. In addition, many students living in suites and apartments are already friends and do not reach out to their neighbors as freshmen might.

Another difficulty in living in the CHCRC is the distance to a dining hall. The Roots Café makes for a close and quick way to get food, but it does not take meal swipes and many students have to regularly make the trek to Berkshire or Hampshire dining commons. While many students may view the Roots Café as another example of favoritism toward the honors students, its effectiveness as a place to have a meal is limited. The Roots Café can only be used regularly if a student has the YCMP meal plan, and the prices of sandwiches and grinders are far too high to be bought frequently with regular cash.

Various other issues include the temperature in the dorm rooms, which is difficult to control, and many students have complained about extremely high temperatures. In other dorms, cell phone reception has been so poor that payphones were installed in the hallways.

Despite its problems, the honors complex does have many positive aspects. Its proximity to the library, Mullins Center and recreation center make it an ideal location to live on the huge UMass campus. Moreover, the idea of community around which the complex is centralized is an added bonus to living in such an area; many students living in the complex take the same classes, live near each other and see each other often walking to and from class. The “small school” vibe those living in the CHCRC experience even while attending a large state school is perhaps one of the best aspects of the new residential area.

Despite its benefits, assertions that the honors complex is inherently “elitist” are both presumptuous and unfounded. One may be inclined to think so while walking through the complex, but can the quality of the dorms be attributed to their status as an honors complex? Any residential complex built in 2013 will look better and employ more modern building designs and technology than those built decades before, whether it has the status of a dorm for honors students or not.

As a student who has lived in a typical double and a student currently living in the honors complex, I can say that its perceived quality is offset by its various quirks and inefficiencies. Students living in other traditional residential areas such as Southwest enjoy many privileges that those in the honors complex do not — namely, more interaction and integration amongst students living in the same dorms. The CHCRC has both its advantages and disadvantages as all the dorms at UMass do.