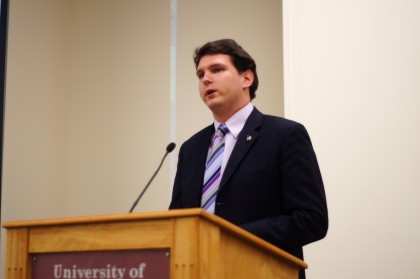 Members of the University of Massachusetts’ Student Government Association spent a portion of their meeting Monday night summarizing the hard work that took place this semester and congratulated each other for making progress in a number of areas.

Vice Chancellor Enku Gelaye shared a similar reaction to the Senate’s accomplishments, and said she was pleased to note the ongoing engagement between the Senate, students and faculty throughout the semester. Gelaye specifically commented on events such as the World Series programming, Lobby Day and Mass Impact Day.

The status of the UMass football team’s budget was also discussed extensively at the meeting. The discussion was initiated by Sean O’Connor, a member of the Finance Committee.

“Ideally, I’d like to see them move to Division III,” he said. “We’ll still lose money, but not nearly as much.”

Reactions to O’Connor’s proposal were mixed.

Chairwoman Hayley Mandeville of the Ways and Means Committee agreed with O’Connor and noted, “The biggest thing we look at funding an RSO is the cost benefit.” Mandeville said the benefits of maintaining a Division I football team are not worth the high cost.

A number of senators argued against this view, noting that despite the high cost of maintaining UMass’ status in Division I, benefits will exist in the future.

Senator Diego Fellows said, “We need to be a little more patient.”

Fellows said he believes that the status of the UMass football team will improve in the coming years, and the expenses of maintaining it will be justified.

Other senators agreed with Fellows, arguing the importance of keeping UMass in Division I despite its costs.

Vinayak Rao, chairman of the Finance Committee, also defended maintaining UMass’ Division I status when he cited the football team as a major source of school pride for the University. “School pride is invaluable,” Rao said.

The Senate did not come to any decisive conclusion, but rather highlighted the benefits and repercussions of maintaining UMass’ football team in Division I.