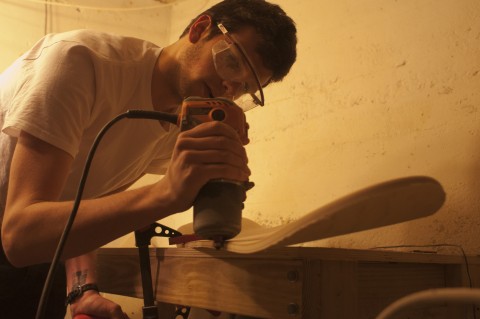 When one thinks of the small businesses that a college student could run, skateboard manufacturer is probably not the first venture to come to mind. But that is exactly what 22-year-old University of Massachusetts junior Russell Phelan is doing in his spare time.

Phelan, who studies computer science at UMass, owns and operates Eden Racing out of his home’s garage just off campus. There, he produces and sells three different models of skateboards and longboards as well as the company’s own line of precision spacers, which is a part of the skateboard that is attached near the wheel to affect its spin.

Founded in October 2010, Eden Racing has shipped its skateboard decks around the world. Customers are based in locations such as Australia, New Zealand, Singapore, Great Britain, Germany, South America and the west coast of the United States, as well as locally in New England.

“I’ve singlehandedly watched it explode through things like Tumblr,” Phelan said. “This movement, by and large, has happened on the Internet.”

Eden’s skateboards are mainly sold online through a simple Tumblr website located at www.edenracing.com. In addition, the company’s products have begun being stocked by retailers, such as Levitate Surf and Skate in Marshfield and Laughing Dog Bicycles in Amherst.

“I think you need to design the skateboard for the riding style of the most progressive riders,” Phelan said. “As the sport evolves, as they invent new ways to ride it, I adapt my designs to meet that. I know they have the knowledge they need to determine that that’s the best product.”

For marketing, the company focuses on a grassroots approach based around social media and longboarding events. Eden’s team riders are a big part of this strategy, as they represent the company in competitions and races.

“With the true local support, dedicated staff and quality boards, I can only see the company expanding,” said team rider Ryan Wolsiefer, a freshman at UMass.

Team riders get more creative control than they may receive at a larger skateboard manufacturer. Team rider Kevin Grady, who is a senior at UMass, designed his own signature-model deck, which he rides in races. His involvement in the design and production at Eden has led Phelan to call him “practically a co-owner.”

“Our business model is to be completely transparent and build functional, practical, customizable skateboards with a humble price tag,” Grady said. “Eden is the tiniest company you could possibly have with 100 percent transparency, no games, no gimmicks, just skateboards.”

The company’s boards start as thin 16-inch veneers of hard rock maple wood. These plies are stacked and adhered together with wood glue, and placed over a mold made of insulation foam shaped to the concave of the final board, before being inserted into an airtight nylon bag. A simple hand pump and household vacuum cleaner are used to take the air out of the bag, resulting in about 5,000 pounds of pressure. This produces a blank, which is a blank deck or board. After drying for around seven hours, a template is sketched onto the blank. This blank is then hand shaped into the final skateboard.

This process, adapted from Roarockit Skateboard Company of Ontario’s approach, is a far cry from the large industrial presses that large skateboard companies utilize. Even so, Phelan estimates that with proper demand, Eden’s current operation could produce 20 to 25 boards a week. Though Phelan hopes to grow his company, his main goal is to contribute to skate culture.

“There is only the community, and if I can make it grow then I have done what I want to do to skateboarding,” he said.

Gabe Scarbrough can be reached at [email protected]