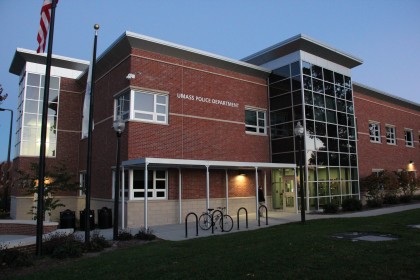 The University of Massachusetts released the independent review of residence hall security by Business Protection Specialists on Wednesday after the company’s nine-month evaluation of the campus.

Overall, BPS made 87 recommendations to the University in its 214-page report, breaking them down in importance from requiring immediate action within one year to recommendations that should be implemented within two to three years. UMPD Chief John Horvath clarified that these were just suggestions and the University was under no contract to implement all of them.

The University has committed to the $2 million in renovations and changes to the current residence halls and its security recommended by the BPS report, Horvath said.

Some of the recommendations have already been put into place based on interim reports from BPS, including correcting door deficiencies, expanding the role of police cadets to patrol common areas and more timely incident reports. Security staff also received a black polo with “Security” printed on the back and is required to wear khaki-type pants to distinguish them from residents of the dorms.

To evaluate the security on campus, BPS began collecting data on the residence halls in March and then came to the University in April to survey the area and get the opinions of students, residence hall security and police cadets. The report compared UMass to three other similarly situated universities.

One of the biggest changes to residence hall security is the elimination of the pen-and-paper guest sign-in system, replacing it with an electronic system. The new system will allow security monitors to have greater vigilance in the lobby and the flow of people into the building as opposed to having their eyes focused on a piece of paper. The system is being piloted in a residence hall starting next semester and if successful will be spread to the other halls in the future.

Renovations will also be done to some of the residence halls, adding permanent security desks to some of the buildings, and reconfiguring some of the door placements and the layouts of lobbies.

BPS recommended replacing all of the 389 cameras in the residence halls but Horvath said that this was not feasible because the logistics would be sustainable over the long term. Fifty cameras are replaced per year on campus already.

Another recommendation that Horvath said needed to be studied more before being implemented was the addition of panic alarms to the residence hall security monitor desks.

Horvath said he was surprised at the level of detail that BPS went to, checking every door and every hinge to make sure that the residence halls were safe. He commended their professionalism and said he was happy with how serious they took the task.

“The University really has made a lot of strides … we really do a lot of things really well,” said Horvath, who added that there are still some things that can be improved.

Vice Chancellor of Student and Campus Life Enku Gelaye said she and the UMass Police reviewed the report together to make sure that the recommendations reflect a sense of security but retain the campus culture. Gelaye said that it was of utmost importance to her that the residence halls have a sense of home and community but make the students feel secure, safe and comfortable.

According to Gelaye, there are approximately 4.4 million swipes or sign-ins to the 51 residence halls on campus per year, averaging 20,000 swipes per day. UMass is the third largest residential life community in the country.

One of the challenges that Gelaye said faces Residential Life and the UMass Police is balancing safety and security with a sense of home and comfort. While at the University, the dorms are the students’ homes so they deserve to be comfortable but also need to feel they are protected.

“I live and breathe to keep people safe,” Horvath said.

“Now that we have the report, it’s another tool in our tool belt.”

Gelaye said that while changes to some security practices will help make the dorms safer, education of resident directors, resident assistants and students also will play a key.

The University and UMPD hired BPS following the alleged rape of a UMass student in the victim’s on-campus dorm in October 2012. The four men charged in the crime were not UMass students.

The report cost the University $40,000, which came out of the Administration and Finance budget. Horvath said it is too early to tell where the $2 million for the renovations and updates will come from.