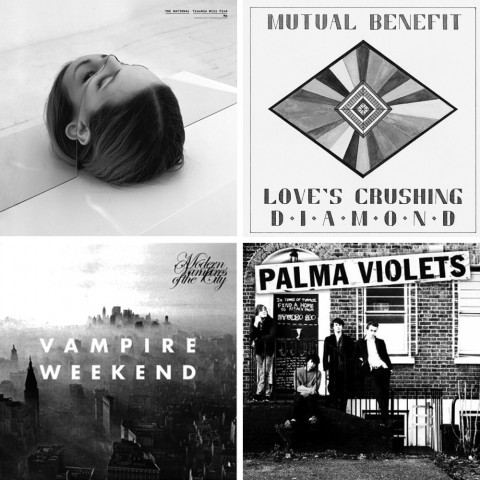 2013, all told, was an incredible year for music. It saw numerous legendary musicians return to the studio for the first time in decades and share the results, good or bad, with the world. It saw artists like Kanye West push and distort the boundaries of what popular music can sound like, and artists like Beyoncé experimenting with the very method of promoting and releasing a new album. Established musicians occasionally faltered, while younger ones took their place in music with incredible records. Sorting through all of it can be a bit of a challenge, but here is some of the best music that 2013 had to offer.

Palma Violets, an incredibly young rock band out of London, released their debut album, “180,” on Feb. 25. With its members’ ages all hovering just above or below 20, Palma Violets deliver an incredibly spirited and tuneful take on classic ‘60s garage rock. What their songs lack in instrumental prowess and lyrical depth they more than make up for in sheer charisma, energy, and catchiness. The band plays every song like it is their last day on earth, only bolstering their ragged, underdog charm. The band’s first two singles, “Best of Friends” and “Last of the Summer Wine,” turned them into an immediate sensation in their home country, and they have slowly been finding success in America. Once you hear a few of the tracks on “180,” it’s hard to not fall completely in love with Palma Violets.

On June 3, Queens of the Stone Age finally emerged from a six-year hiatus with their sixth album, “…Like Clockwork.” A hard-rock album entirely bereft of all of the unfortunate trappings the genre tends to bring with it, “…Like Clockwork” quickly establishes itself as the band’s best work to date. Featuring the always-twisty songwriting of frontman Josh Homme with the impeccable grooves laid down by drummer Dave Grohl (of Nirvana and Foo Fighters fame), “…Like Clockwork” is incredibly ambitious while simultaneously playing perfectly well into Homme’s strengths as a songwriter. Blistering but detailed, bludgeoning but sometimes incredibly sweet and delicate, “…Like Clockwork” saw an already well-established band taking their game to new heights.

The National, the crafty and deceptively brilliant New York-based band; also returned with a new album this year. “Trouble Will Find Me,” released on May 17, is the National’s sixth album; one that continues the incredible artistic streak the band has been on for almost a decade now. Following the perfection of their last two albums, “High Violet,” released in 2010, and “Boxer,” released in 2007, was without question an incredibly tall order for the band. But in a style typical of the band, they made it look easy on “Trouble Will Find Me.” Defined by Matt Berninger’s baritone voice, and anxious, self-deprecating tales of white-collar city-dwellers and their twisty lives; The National make an incredibly beautiful, orchestral brand of rock rich with detail and emotion. While not quite reaching the heights of some of their past work, “Trouble Will Find Me” is a fantastic album by a band in total control of all aspects of their sound.

The best debut album of the year probably had to go to Jordan Lee, recording under the name Mutual Benefit. A gorgeous, orchestral, baroque-folk album, “Love’s Crushing Diamond,” released on Oct. 25, is an embarrassment of riches. All seven of its songs are immaculately crafted, filled with beautiful melodies, and fantastic, detailed instrumentation. For such a young, previously unproven artist, “Love’s Crushing Diamond” proved to be one of the year’s biggest surprises.

The one band though, that stood above all others this year though was Vampire Weekend. Their third album, “Modern Vampires of the City,” took the already high standards the band had set for themselves and blew them sky-high. Released on May 14, the album decimated any remaining thought that the band was merely an annoying quartet of privileged ex-Ivy Leaguers who played an obnoxious, intellectual and American variation of Afrobeat music. “Modern Vampires” manages to surprise and thrill at every turn; gliding effortlessly through different tempos, moods, and structures. No song sounds anything like the one that came before. The band tries anything they think will sound good, without any fear or inhibition, and the results are absolutely astounding. With this, Vampire Weekend established themselves as one of alternative rock’s crown jewels, a band whose creativity seemingly knows no end.