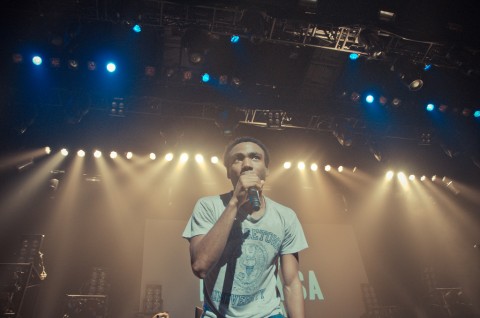 Childish Gambino, or Donald Glover, released his second studio album “Because the Internet” on Dec. 10, settling in his niche as a rapper, as well as a comedian and producer. Glover got the stage name Childish Gambino from a Wu-Tang name generator online. Gambino not only released 19 tracks in his new album, but additionally a 76-page script depicting him as the estranged son of Rick Ross who deals with the empty life that comes with being born into wealth and not fitting in.

Much of his album emphasizes an emotional isolation which comes as a product of social media, as well as a lack of direction in life. Glover fluidly combines his budding confidence and likable nerdiness in the album, forcing you to get sucked into scrolling through the script as if it were a Tumblr dashboard. Featuring cameos from upcoming names like Chance the Rapper and Jhené Aiko, Gambino’s voice is complemented by the unique collaborations.

The album cruises through a few different genres and samples, from jazzy piano pieces to electronica inspired and R&B soul sounds. Sonically, it provides a comfortable tempo and flows effortlessly between tracks. Gambino pulls the listener in and allows an introspective look at fame and desires.

“Because the Internet” picks up right where his first album “Camp” left off, with a teenager returning from a melancholic camp dismal as ever. The album takes the traditional view of a privileged Californian and twists it into a deeper and darker realm of introspection. The script focuses on the teenager and his antics as he searches for deeper meaning in most of his vapid lifestyle.

The script is the main focus of the project, while the album serves mostly as a soundtrack. Looking at Gambino’s wide range of skills in screenwriting, comedy and producing, it’s not surprising that he chose to combine all mediums into one entirely eclectic creation. Some tracks like the minute long “Urn,” only make sense to the listener if they have familiarized themselves with all aspects of the project.

Just as on his first album, Gambino is still angry and trying to find himself. Much of “Because the Internet” shows his outsider tendencies and his struggle to truly accept his place in the world, even if he doesn’t quite understand it. It appeals to the loner in all of us, making the album oddly soothing and relatable. The smooth R&B beats mixed with a light electronic combines into an entirely unique and peaceful melody throughout the album.

Songs like “Telegraph Ave” and “Pink Toes” are light and airy, but still reflect his desire for love and acceptance into the ugly world of fame and faux importance. In “Telegraph Ave” he uncovers bits of his soul, “And you wanna be a mom and I wasn’t mad at her / I was thinking ’bout me, I’d be really bad at it,” and connects easily to his listeners inner fears and introspections.

“3005” is a soft and radio friendly song that shows off Gambino’s lyricism as well as singing competence. Immediately a favorite, the catchy hook followed by crisp beats keeps the listeners heading bobbing and singing along. Another standout is “Sweatpants” with simplistic beats layered over each other creating a complex beat paired with fast spitting lyrics showcasing his creativity. Plus, it turns out that Gambino has some singing chops and shows them off on “Shadows,” “Flight of the Navigator” and “Urn,” all strong tracks to showcase the introspectiveness of the album.

Not everything is so thought provoking though. “Worldstar” comes out of left field, being named in honor of the hip-hop culture website. This track is a bit out of place, yet somewhat whimsical as it slyly comments on the mob mentality that the internet propagates. “Zealots of Stockholm (Free Information)” is also a chaotic mix on electronic influenced syncopation and lazy puns that hardly make sense like “We can kick it like it’s FIFA, homie / Nevertheless, I got that fresh like it was Crest” leaving the listener confused. These underwhelming quirks are few and far between, and are easily covered by his outstanding performance on most of the album.

The album itself is enjoyable and an exciting introduction to the newly matured sound of Childish Gambino. As his directorial debut, Gambino exceeds expectations with his touching view of isolation and his own experiences with it. The album fully enhances the script, leaving the viewer/listener enraptured by their computer screen. The irony of this isn’t lost on him.

“Because the Internet” speaks to the modern generation which has grown up in the fast paced and constantly connected digital world. Without the script, a lot of the magic is lost, so set aside an hour or two and go to becausetheinter.net to read the script, watch the short films filled with cameos of the features and listen to the songs. Only then will the album fully come together and Gambino’s creative masterpiece will come together.