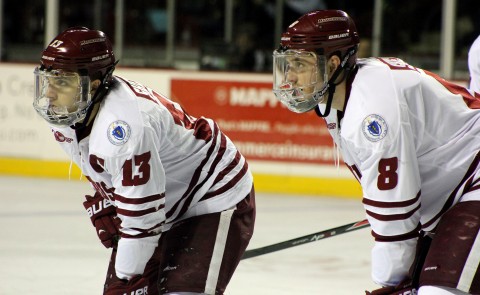 Colin Shea holds no reservations when speaking on his experiences playing against Conor Sheary as a kid.

Quiet, undersized and often the youngest player on the ice, Sheary would sneak up on his youth hockey opponents with a remarkable combination of skill and speed that would give young defensemen like Shea fits.

Shea started dealing with this nuisance at about 8 years old, when he played for the Minuteman Flames and Sheary was on the Boston Junior Eagles. It was an unenviable challenge that didn’t go away until Shea joined the Junior Eagles in ninth grade.

There, he got a chance to know what made Sheary such a menacing figure despite his small stature. He had an unrivaled work ethic that won praise from teammates and a competitive edge that was apparent on game day, at practice and off the ice.

That hasn’t changed to this day.

On the ice, Sheary is Shea’s teammate on the Massachusetts hockey team. Off the ice, he is Shea’s friend and roommate along with Anthony Raiola and Patrick Kiley.

No matter the setting, he’s as cutthroat as ever.

“He’s always a big competitor, whether it’s golf, hockey, video games, anything we do. He always wants to win,” Shea said. “He always wants to put a good effort in. He usually does. He’s one of those kids who’s good at everything.”

Most importantly, however, Sheary is a leader. He’s co-captain of a Minuteman team with nine seniors, and the face of a class that has spent nearly four years overwhelmed by criticism, change and disappointing outcomes.

Now he has seven regular season games and at least one Hockey East Tournament game to leave his imprint on a program desperate to create a winning culture.

“For someone to see about our class that we haven’t won a game in the playoffs, or that we didn’t even make the playoffs last year, it hit home with a lot of us,” Sheary said. “A lot of us seniors take that to heart, so we wanna leave a legacy here. We wanna be that team to break through a little bit.”

It would make for a satisfying end to a career that began at the youngest of ages.

Kevin Sheary’s winter sport of choice as a kid was basketball. But he bred a hockey family with his own children.

Two of his three kids went on to play in Hockey East – Conor, the youngest, at UMass and his middle child, Courtney, at New Hampshire – learning to skate shortly after learning how to walk.

Conor started skating before he was 2 years old. And once he got his skates on, it was hard to get him to take them off.

“I actually rooted for them, which kinda stinks now,” he said. “My favorite player back then was Brian Gionta. I used to wear number 12. He was the reason for that. He was probably the reason I wanted to play college hockey.”

Sheary’s first real taste of organized hockey came with the Junior Eagles. Not only was he the smallest player, he was also the youngest.

Sheary, born in 1992, played on the Eagles’ 1991 birth-year squad. He was involved with the team a year above him because the person who ran the program, John McNamara, a former BC hockey player, was friends with his father and gave him his start.

Being relatively young is something that hasn’t changed for Sheary. He was the youngest player in his class at Cushing Academy in Ashburnham, and at 21 years old is the Minutemen’s youngest senior and ninth-youngest player.

While that may have been an adjustment for Sheary at first, it has been beneficial to his development as a player and person, according to his father.

“One thing we’ve noticed about all our kids is they all hung around with an older crowd,” Kevin Sheary said. “I think he’s considered mature for his age.”

Conor Sheary first realized his potential in hockey as a sophomore at Cushing. He didn’t make the varsity team as a freshman, due mostly in part to the fact that he barely eclipsed 5-feet tall and hadn’t started working out. But the next year he made the team and got words of encouragement from his coach.

“My coach used to take me aside and tell me, ‘You have so much more potential than you’re showing,’” Sheary said.

His junior year was highlighted by the recruiting process.

Sheary received interest from multiple schools, but the two that stood out were UMass and BC – the same team he rooted for as a kid.

He had little interest in playing for the Eagles, however. He probably would’ve had to spend a couple years in the USHL before he could join the team, and seemed to have had enough with maroon and gold.

“Believe it or not I think he was BC’d out by the time he was in high school because he didn’t really have an interest in going there at all,” Kevin Sheary said.

Conor Sheary committed to the Minutemen his junior year of high school. His oldest sister, Caitlin, was a UMass graduate and was influential in his decision. Most importantly, he could play right out of high school on a full scholarship.

“I couldn’t have decided to come to a better place than UMass,” Sheary said. “Hockey-wise it fit me well. In that sense I’m really glad I did it.”

Sheary has faced a number of challenges since his arrival to Amherst in fall 2010. He’s had an increasing responsibility to produce offensively each season, has faced some of the nation’s toughest competition in Hockey East and has gone through more coaching changes than imaginable.

Sheary’s also one of the smallest players in Hockey East at 5-foot-9, 175 pounds, but is only three points away from 100 for his career.

Whether it be adjusting to a new system each season or fighting through a 6-foot defenseman, Sheary has been forced to overcome adversity, and he’s embraced it fully.

“Anything that they say I just use as motivation, and proving people wrong is a big thing of mine, and I love doing that,” Sheary said.

His biggest challenge to date, however, has been to lead the Minutemen as their captain.

Sheary is naturally a quiet person, so asking him to lead a team of 26 other players is a unique responsibility. At first, he wouldn’t speak much, choosing to lead by example and only speaking up when he found it necessary.

The job got harder with each UMass loss. The Minutemen endured an eight-game winless stretch from early November into December, and it was Sheary, as captain, who was forced to bear the burden. As UMass kept losing, the weight only got heavier.

“It’s hard. It’s had its ups and downs,” he said. “You feel like it’s put on you a lot more so than other players or than coaches just because you’re wearing the C.

“Guys will talk to me, but it’s more so what happens on the ice,” he added. “When you’re not winning it’s hard to come to the rink and work as hard as you were the week before when you know you’re not getting results, and keeping all the players together and keeping everyone straight forward and even-keeled throughout the hard times is probably the hardest part.”

Despite the hard times, he’s always had the faith of the locker room, especially UMass coach John Micheletto, who cited Sheary’s work ethic and the respect his teammates have for him as clear signs that he was the right choice as captain.

“It’s not an easy job and I think he’s done the job mostly because he leads by example,” Micheletto said. “Guys respect him out of the gate because of that. He’s not a guy that’s gonna talk all the time, so when he talks people listen. That’s been really valuable to us.”

Sheary got some relief in late November when Troy Power was named co-captain along with him. Both Sheary and Power agreed that the duel captaincy has made the job a little easier, and the two work cohesively to keep the team motivated.

What has also occurred in that time is an evolution in Sheary’s leadership ability. He has become more vocal and has adjusted to his responsibility throughout the season.

“He’s learned how to be an exceptional vocal leader,” Power said. “It’s a great attribute for him.”

“He’s come a long way and it’s good to see,” Shea said. “As a friend and a roommate you can really tell he’s improved.”

Statistically, Sheary’s career has been a success. He’s always been one of UMass’ top scorers the last four years, including holding the team lead in points so far this season (20), and hasn’t been penalized in all 26 games played this year.

But the individual achievements aren’t important for him. He shies away from questions about his personal accomplishments with the program, instead shifting the focus on the importance of this final chance for his senior class.

Sheary is aware of outside opinions. It’s easy to call his class a disappointment when looking at the win-loss column. But that’s what makes this last stretch so crucial. Ahead of him is one last chance to create a winning hockey culture in Amherst. And it’s his mission as captain to make that happen.

“For our whole senior class, we want to leave a legacy,” Sheary said. “We talk in the locker room about leaving a legacy all the time. We want people to remember our team. With the (seven) games left in Hockey East we want to be remembered for making a run.

“I don’t have any personal goals that I want to be remembered for; it’s just more of a team motivation.”