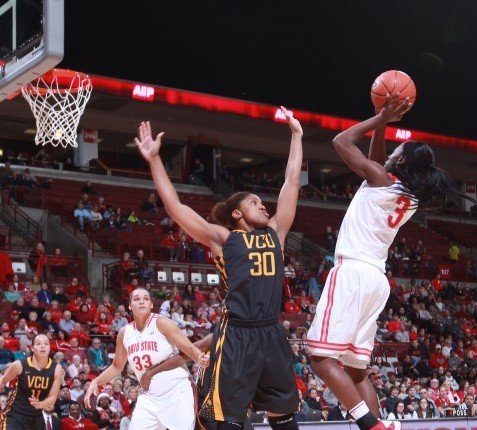 But in a rematch of last year’s Atlantic 10 championship semifinal – a game in which the Flyers fell to the Hawks 61-54 – Dayton yet again came up short, losing 75-63.

Both teams traded points to begin the second half as neither team could put the other away. After being down by seven early in the second half, forward Sarah Fairbanks (14 points) helped Saint Joseph’s finally take the lead with 12 minutes remaining

Dayton hung in with the Hawks for the next seven minutes, cutting the lead to as close as a single point. But the Hawks went on a 9-0 run over the course of the next three minutes, sealing the victory for good.

The loss marks the first time this season Dayton (12-5, 5-1 A-10) lost when leading at halftime. The Flyers were held to just 33 percent shooting from the floor, tying a season low.

Virginia Commonwealth convincingly beat George Mason 112-86 despite a strong second half from the Patriots on Saturday.

George Mason began the game by committing seven turnovers in the opening four minutes and found itself in an 18-0 hole. The trend continued as the Patriots’ defense could not slow down the Rams’ shooting and went into the break trailing 67-40.

VCU (17-4, 5-3 A-10) never trailed in the game. Its 112 points tied a school record for points in a game set earlier in the season against Massachusetts.

George Mason looks to secure its first conference victory on Wednesday when it hosts the No. 1 team in the conference, Duquesne. The Rams will travel to Saint Joseph’s on Saturday.

St. Bonaventure continued its recent string of success on Saturday.

Behind forward Katie Healy’s seventh double-double of the season, the Bonnies extended their winning streak to four games with a 53-48 road win against Richmond.

Both teams struggled offensively in the first half. The Spiders’ Amber Nichols converted on a buzzer-beating 3-point shot to give Richmond a 27-25 advantage heading into the half.

With the game tied at 44 in the second half, the Bonnies went on a 9-2 run to take control of the game.

St. Bonaventure will look for its fifth consecutive win when it hosts Fordham on Saturday. Richmond will travel to La Salle on Wednesday.

Marc Jean-Louis can be reached at [email protected]