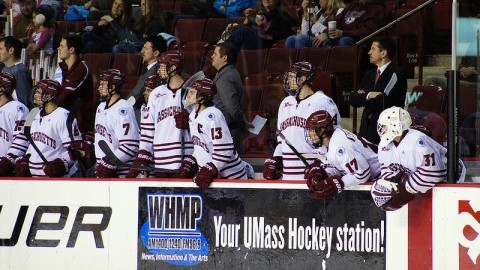 By the time its 3-2 upset loss to American International on Jan. 14 became a reality, the Massachusetts hockey team was already anticipating its next game.

The problem was that the next game was still 10 days away.

The Minutemen haven’t played since that Tuesday night at Mullins Center. Since then, they’ve been battered with criticism on social media and forced to watch other teams continue their respective seasons, all while they have lived with the burden of one of their worst losses of the season for the past week.

“If you asked anyone in our locker room, we would’ve loved to play (the next night),” co-captain Troy Power said. “Unfortunately we’ve had that taste in our mouth for the last week. When a game goes that way, you want to bounce back and get a win as soon as you can.”

While another game may have provided some emotional relief, UMass has reaped the physical benefits of a long layoff between games.

Most game weeks consist of working on both skill workouts and game-specific preparation in practice. But with the extra time off, the Minutemen focused specifically on skills and conditioning last week, while putting an added emphasis on preparation for its upcoming series with Merrimack.

“There wasn’t a lot of systems or anything like that,” Power said. “But I think having that extra time allowed us this week to really focus on game preparation and stuff like that, and not really worry about skill development, because we had that extra time to do that.”

The last week also gave UMass a chance to get rested for the final nine games of the season. But according to Minutemen coach John Micheletto, it may not be as necessary for his team at this time of year as one may think.

UMass is only one month removed from the holiday break. And with their Jan. 10 game versus Cornell cancelled, the Minutemen have only played three times in the new year, one of those games being an exhibition.

“We haven’t worried about rest,” Micheletto said. “Their energy has been good. We’ve been monitoring their reps throughout the course of the year, so it’s more about getting ready to go for the nine-game stretch that we have looking forward.”

The Minutemen understand the importance of these final nine games. They are one point behind Notre Dame for the eighth seed in Hockey East, which would give them a home game in the first round of the playoffs.

With its next three games coming against the two teams below it in the standings (Merrimack and Boston University), UMass’ chance to improve its positioning is greater than ever.

“It’s very important,” senior defenseman Colin Shea said. “We’re trying to gain as many points in the Hockey East standings so we can have a good playoff run here at the end of our career.”

That sentiment could be echoed by all of the Minutemen’s seniors, who have no playoff wins in two appearances during the first three years of their career.

UMass enjoyed its working break, but now the team is refocused and preparing for its last chance to turn its season around, especially for a senior class desperate for success.

“That’s what we’ve said from the beginning,” senior forward Michael Pereira said. “You don’t really try to talk about it as much – you just let your play speak for itself in practice with your teammates.”