Marriage not a quick poverty fix 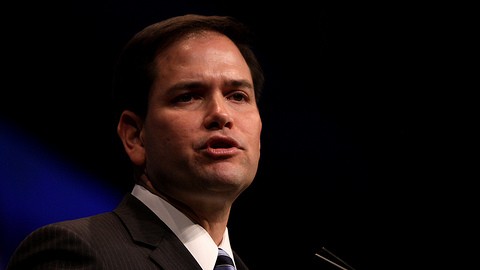 In 2012, 13.7 percent of American adults ages 18-64 were in poverty, as were almost 22 percent of children under the age of 18. Eighty percent of adults in the United States are also dealing with near-poverty and unemployment. It’s clear: The nation has a poverty (not to mention unemployment) crisis on its hands.

But fear not, the GOP has a solution.

Earlier this month, which marked the 50th anniversary of former President Lyndon B. Johnson’s “War on Poverty,” Sen. Marco Rubio gave a speech in which he argued, “The greatest tool to lift children and families from poverty is one that decreases the probability of child poverty by 82 percent. But it isn’t a government program. It’s called marriage.”

That’s right. Are you living in poverty? Get married.

This isn’t a new conservative argument. The GOP has long been against what they call “government handouts” (i.e., unemployment benefits) as a solution to poverty, and balk at the idea of raising the minimum wage. According to Rubio’s speech, those are “partial solutions” that help people to merely “deal” with poverty rather than “emerge” from it.

With those words, Rubio was attempting to eloquently disguise a hateful message: Sorry poor people, the government shouldn’t be responsible for helping you to not be poor anymore.

And though I disagree with that particularly mean sentiment, it is a fairly common one. So, people who subscribe to it must then also subscribe to different solutions, like marriage, particularly aimed at single-mother families. But while many right-wingers blame the breakdown of the family unit for poverty woes, experts say marriage just isn’t the answer.

Recently, Maria Shriver, in partnership with the Center for American Progress, released a report detailing economic realities facing women, in which Director of the Children and Families Program at Next Generation Ann O’Leary writes, “Rather than promoting marriage as a silver bullet for women’s economic troubles, the government should instead promote policies that allow women to complete their educations, to find stable and well-paying jobs, and to have the work supports necessary to meet their family needs…”

O’Leary gets it exactly right. Just over four million single-mother families are living in poverty in the United States. To tell them that marriage is the only way out is not only offensive, but it also does a great disservice to impoverished single mothers (and people) everywhere to not provide them with actual concrete and stable solutions that they can take advantage of on their own.

The slightly unnerving part is that, at first glance, the marriage argument makes sense. Two people making money in a family is better-off, economically and otherwise, than a household with only one. But assuming that it’s as easy to just get married as the GOP thinks it is, there’s still another problem with this position.

For single-mothers living in poverty, the pool of potential spouses around them lacks many people who would be financially stable enough to help support a family. Kristie Williams, Ph.D., with the Council on Contemporary Families, made this exact argument in a report in which she argues that the flaw in the marriage argument lies in the assumption that “all marriages are equally beneficial.” They aren’t. She writes, “Single mothers are especially likely to marry men who have children from other partnerships, who have few economic resources, who lack a high-school diploma, or who have been incarcerated or have substance abuse problems.” These issues combine to form the precise antidote to healthy and economically successful partnerships.

Steve Randy Waldman, author of the blog Interfluidity, makes a similar argument, claiming that marriage promotion to impoverished communities is “not merely ineffective. It is at best ineffective.” He writes that our current socially and economically stratified society allows for “good marriage prospects” (or those who are economically and socially stable) to hold out for other “good marriage prospects.” So, the pool that’s left over after these good prospects marry each other “may often be, objectively, a bad one.”

In other words, society’s economic inequality doesn’t leave impoverished single mothers with an adequate pool of these good marriage prospects. Entering into marriages with not-so-good prospects won’t improve the fundamental aspects of their lives and might in fact make them worse. And as Waldman writes, marriage promoters might be doing harm by suggesting marriage as a solution despite knowing the likelihood of an impoverished community marrying poorly.

This all isn’t to say that marriage can’t be a good thing—it can be, and often is. But if people decide to marry, it should be for other reasons, not because it’s the only way to “emerge” from poverty. Marriage cannot be the singular answer to one of the most damaging and serious social issues facing the United States today. It fails to provide any true or immediate assistance to those who need it. If the GOP truly cares about helping the impoverished, they’ll have to come up with a better solution than matrimony.