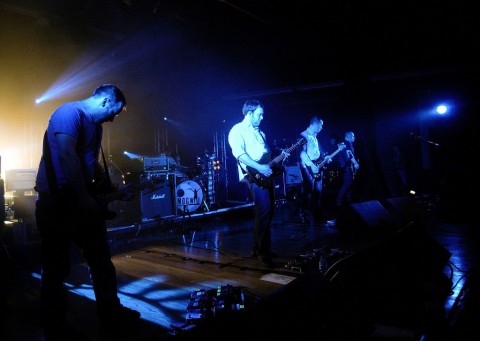 Scottish post-rock band Mogwai has been quite prolific as of late. Following 2011’s solid album “Hardcore Will Never Die, But You Will,” last year the band released their intense, creepy soundtrack to the French television show “Les Revenants.” Listeners get the feeling that that is where Mogwai is best suited; scoring something visual. Their grand, epic, typically instrumental brand of rock always does its best to paint a picture in the mind of the listener. It often seems like the band is scoring something visual that only appears in their own minds, leaving the listener with the task of painting the aforementioned picture themselves. Rave Tapes, released on Jan. 21, is their eighth album; one that integrates more electronic sounds than their previous efforts.

But even with a supposedly larger sonic palette, the same issue that has plagued much of Mogwai’s recent music ends up rearing its head on “Rave Tapes.” Even though the band certainly has a sense of scale on their songs, there is very little about the 10 tracks here that are fresh, even for a band as consistently unique as Mogwai. While “Hardcore Will Never Die” occasionally felt flat, it had disparate highlights such as the beautiful “How To Be A Werewolf” and the scorching “You’re Lionel Ritchie.” “Rave Tapes” plays almost entirely as a straight line; neither offending nor exciting at any point.

Opener “Heard About You Last Night” is probably the album’s best moment. Featuring a slow, pulsating bass and a dreamy electric guitar riff that is situated to repeat itself throughout, the song is certainly pretty. But more importantly, it sets a nice, consistent path for the rest of the album to follow. Unfortunately, nothing on the remainder of the record is as musically dynamic and engaging as its opener. “Simon Ferocious” and “Remurdered” both rely heavily on electronics, but feel listless, cumbersome and much longer than they actually are. “Hexon Bogon” and “Master Card” are more brief, snappy and rough around the edges, but still feel similarly unremarkable and similar to their previous material.

Other than a somewhat amusing spoken-word vocal track about Satan and Led Zeppelin’s “Stairway to Heaven,” “Repelish” has more of the album’s lackluster qualities. “Blues Hour,” throwing some sung vocals into the mix, actually perks the album up again for a few minutes, but the excitement does not last long. The album ends with the flat “The Lord Is Out of Control.” The song continues the somewhat unfortunate tradition the band has established of including a track with vocoder-effected vocals on almost every album they make.

Mogwai basically patented the dynamic quiet-huge crescendo-explosive volume formula that post-rock bands from Explosions In the Sky to Sigur Rós have copied for years. But as original as they were back in the day, they continue to steal from themselves more and more with each passing album. Their music has become increasingly vague and less direct, becoming more difficult to understand and enjoy. “Rave Tapes” would be a great soundtrack to a film, but on its own there is little to behold.