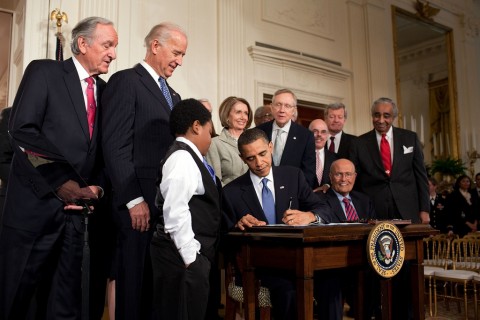 Recently there has been a torrent of columns, articles and news stories which take aim at the failings of the Patient Protection and Affordable Care Act. They predict the ultimate doom of the system that only actually took effect on January 1; they loudly proclaim that Obamacare is not an effective solution, let alone a moral or just one. However, what sets this recent crop of anti-Obamacare journalism apart from the kind we’ve seen since the bill was introduced is its source: it is written by liberals.

Michael Moore for the New York Times, David Cay Johnston for Newsweek and Pearl Korn for Huffington Post, among others, have blasted Obamacare, seeking instead to replace it with a single-payer, universal healthcare system similar to those found in many other developed nations.

With the final withdrawal of the liberals, Obamacare now has no political supporters to defend it other than the President’s own administration. Political conservatives have hated it from the get-go, liberals now publicly want to switch systems entirely in favor of single-payer, and the center (already a neglected policy bloc) just sees a massive mess of a system, and it is right. Our healthcare system is a bizarre abomination that primarily relies on employers to provide care to their employees, has varying inconsistent levels of state-provided care and yet also has such an incredible number of restrictions that it bears no resemblance to a free market.

It is a mess, but how did we get here? Who actually wanted this system in the first place?

No one. Conservatives have always been for free-market healthcare, liberals have always been for state-run healthcare and the respective political parties they use to achieve their political ends have consistently stuck to this dichotomy. Healthcare has been, and will most assuredly continue to be, a major battleground of modern politics. It is by far the most clear-cut example of the fight over the role of government in citizens’ everyday lives in today’s political climate, one that is exacerbated by the fact that the current system is burdensome, inconvenient and absurdly expensive. Republicans and Democrats disagree on quite a lot of issues, but in no other case is the existing system so incomprehensibly terrible that it is a problem that must be tackled to ensure the future of the U.S. economy.

Compared to healthcare, social security is a simple fix, green energy is a minor disagreement and gay rights is a walk in the park. All three are important issues which weigh heavily on the minds of politically-minded individuals and consistently are the subject of movements and campaigns, but none of them threatens to derail the entire economy of the United States of America. Despite healthcare’s pressing importance and desperate need for reform, unlike the other issues, it’s not making progress, because the two sides are so far apart on this issue that a compromise to specifically iron out the existing difficulties of the system simply cannot happen.

To fix the system, one would need to fix Medicare reimbursements, erase state borders in the healthcare market, eliminate employer involvement in providing coverage, fix abysmally low Medicare reimbursement rates and make the costs of all medical procedures and treatments public information, among other things. These are not easy fixes on their own, but when put together they become a system of healthcare coverage that, while more efficient and effective than what we currently have, does not fit the ideal of either party.

A fixed version of our current system would maintain government-sponsored healthcare for the poor and elderly, have an individual mandate and prohibit the denial of coverage based on preexisting conditions while simultaneously leaving it to individuals to purchase the coverage they want, promoting competition between insurance providers and eliminating the employer tax exemption for healthcare. Neither conservatives nor liberals are willing to commit to long-term healthcare reform which would not conform to their distinct definitions of what the healthcare system should be, yet true reform would contain some provisions hated by liberals and others hated by conservatives.

And this is why both sides of the political spectrum want a completely new system: neither wants to fix what we already have. In the name of ideological purity, both parties have abandoned the ideals of good governance and compromise. Healthcare is an enormously complex issue, so it is absurd, in fact almost criminal, for elected officials to suggest that there is a simple solution. In their separate crusades against the system, they have forgotten that the best system is not the one which best fits a certain moral or ideological paradigm, but the one that works.