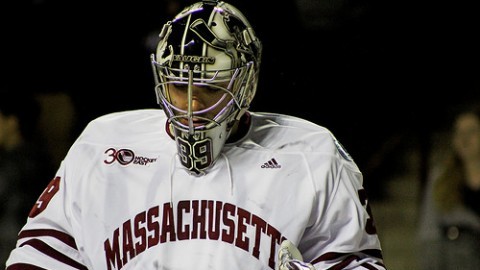 NORTH ANDOVER – As the officials made their way to the video booth, all the Massachusetts hockey team could do was wait and hope.

Merrimack thought it had just tied the game. The Minutemen were waiting for the seemingly inevitable overturn of the goal.

Chris LeBlanc just put the puck into what was a wide open net to make it a 2-2 game in the third period after UMass goaltender Steve Mastalerz was knocked out of his crease by Warriors defenseman Jonathan Lashyn.

In most cases, that’s a goalie interference penalty, not a goal. But what most people didn’t see was the UMass defenseman that cross-checked Lashyn into Mastalerz. The officials made the clear decision and the crowd at Lawler Arena erupted.

What followed was a complete 180-degree turn in energy and emotion. The Minutemen once appeared on their way to a convincing weekend sweep of last-place Merrimack. Two minutes, 11 seconds after the tying goal, they were on their way to a 3-2 loss to settle for the weekend split.

It was a game full of lead changes and personal milestones by Michael Pereira, but only one moment stood out to UMass coach John Micheletto after the game.

“It’s a tough turn there when you get a shove from behind and our goaltender gets completely cleaned out of the blue paint to score an empty-net goal to tie it up,” he said. “I get that there was contact, but it’s a tough pill to swallow when the game-tying goal (came) with as many times as Steve got touched during the course of that game.

“I would’ve liked to see it go in a different direction,” Micheletto continued, “but obviously coming off of it we didn’t manage our emotions. … It’s difficult to watch an empty-net goal be that big a part of the game.”

It was a swing the Minutemen weren’t ready for, and it was apparent in the way a deflated group came on the ice for the rest of the contest. The game’s turning point passed and Merrimack seized it when a Mike Busillo turnover in the neutral zone turned into a 2-on-1 chance and a Warriors go-ahead goal.

“Looking back at it, guys gotta pick up sticks after the push into (Mastalerz),” Pereira said. “That’s the way it goes. (Merrimack) is a little harder in the crease and it’s something we can look back on and say, ‘You got outworked, you got outbattled.’

“It made it a completely different game,” he added. “It kind of put us on our heels a little bit.”

Overshadowed in UMass’ disappointing defeat is the achievements of Pereira, whose two-goal performance gave him a pair of career milestones.

The senior forward’s first goal 2:41 into the second period gave him 50 for his career, while his second at 18:05 was his 100th career point. Pereira became the fifth player in UMass history to score 50 career goals and 100 career points.

“It hasn’t really sit in yet. I think tomorrow maybe I’ll get a couple calls, celebrate with my family. It’ll be fun.”

Saturday was only part of a highly productive weekend for Pereira, who scored a goal and assist in the Minutemen’s 5-2 win over Merrimack on Friday as well.

Despite the loss, Micheletto took time to praise his senior’s accomplishments.

“He had a great jump (Saturday),” he said of Pereira. “Not only does Michael display unbelievable speed, he’s got such great spirit for our team. Our guys are so fond of him, so for him to get his 50th goal and 100th career point. … to come back and give us as many minutes as he did is a huge testament to his desire to help us win.”