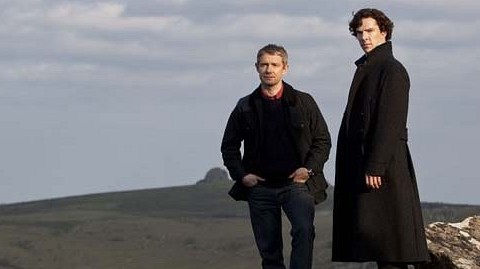 Editor’s note. The following story contains spoilers from the first episode of Season 3 of “Sherlock.”

A lot has been expected of “Sherlock” fans during the show’s recent hiatus.

Not only did they have to endure a massive cliffhanger and one of the most emotionally taxing series finales on TV in recent memory, they were also left with nothing but their own speculation and theories on what would become of Sherlock and Watson for nearly two years.

Finally, the third season of “Sherlock” premiered on PBS this past Sunday, so “Holmesians” may finally breathe easy.

All joking aside, the return of “Sherlock” to American TV screens proved to be a successful one, as the premiere drew in an average of around 4 million viewers, a 25 percent increase from the Season 2 premiere. Clearly the long hiatus didn’t hurt the show’s dedicated fan base. If anything it helped it grow.

A lot has changed for the major players of the show since the ending of Season 2. Benedict Cumberbatch and Martin Freeman, Sherlock and Watson respectively, have rocketed to enormous levels of fame due to a couple of starring roles in major Hollywood productions and show runner Steven Moffat has been busy running another wildly popular BBC series in “Doctor Who.’

Thankfully all that time away from the series seems to have had no effect on any of them as the episode itself was a return to form and, aside from a few minor missteps, a wonderful hour and a half of television.

Bookmarking the beginning, middle and end of the episode are a few possible ways in which Sherlock could’ve faked his death. A couple of these are put forth by a Sherlock fan club dedicated to proving its theory that the detective is still alive. The club and the theories themselves act as a hilarious mirror held up to the audience, the creators’ way of saying, “Yes, we know how weird, wonderful and dedicated our fans are.”

The third theory, given to us by the sleuth himself, seems to be what truly happened and, while I won’t go into exact details, it seems a bit intricate and convenient. This over-the-top approach is understandable in the context of his fake death, but it is a running theme that plagues the rest of the episode as well.

We are told Sherlock has been away for so long because he has been single handedly dismantling Moriarty’s terrorist network following his nemesis’ death. On top of that, he is called back to London by his high ranking government official brother Mycroft, to, you guessed it, help dismantle another terrorist cell. This and the scene of Sherlock being tortured in a Russian military base feel out of place in the series. At times I half expected Holmes to take off his mask and reveal that we were all tricked into watching some bizarre, made-for-TV James Bond film.

These delusions of grandeur aside, the rest of the premiere was a delightful balance of humor and mystery. Rather than go the route of an emotional return, Sherlock remains as self-centered and oblivious to human nature as ever, but in the charming way we’ve come to expect from Cumberbatch’s take on the character. He makes quite the spectacle of himself when revealing to Watson that he is indeed alive, making for one of the more comedic moments of the episode. His treatment of Watson at times feels a little too insensitive, but this is countered with Freeman’s excellent conveyance of Watson’s mixed feelings of anger, relief and loyalty toward Sherlock, so it almost goes unnoticed.

Just as London is better off with the return of the world’s most intelligent and insufferable detective, so too is the television landscape. With two episodes left in the season and the promise of at least two more seasons to come, it seems fans have a bright, “Sherlock”-filled future ahead of them. Let’s just hope the creators can keep the show from becoming too grandiose for its own good.

Cory J. Willey can be reached at [email protected]