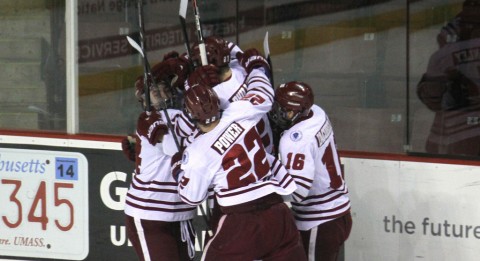 Massachusetts hockey coach John Micheletto’s goal for his team each game is to be the first to score three goals. He’s a believer that the team that wins the race to three often wins the game.

He didn’t wait long to get his wish Friday night.

The Minutemen scored three first-period goals to cruise to a 5-2 win over Merrimack in front of 4,102 at Mullins Center to snap a five-game winless streak and claim their second consecutive Hockey East win.

UMass’ three goals in the first were its most in a period since it scored four in the second period of its 5-2 win over Michigan State on Oct. 19, and was just the second time this season it has scored five or more goals in a game.

“It’s nice to get to three,” UMass coach John Micheletto said. “We talk about it a lot, you hear me say it an awful lot, the race to three usually wins. … To close the game out like we did, I was very happy with the effort.”

Steven Iacobellis, Troy Power, Adam Phillips and Branden Gracel all scored for the Minutemen, while Michael Pereira reached 98 career points with an empty-net goal and assist and Conor Sheary reached 95 career points with a two-assist night. Goaltender Steve Mastalerz made 25 saves for his seventh win of the season.

With 10 days between games following its 3-2 loss to American International in which it had 59 shots on goal and 114 total launches, it was a good chance for a UMass team averaging 2.04 goals per game entering Friday night to take out some frustration on Hockey East’s last-place team.

“We came into this game knowing we kinda had a chance for a new season,” Pereira said. “All the games down the stretch are in Hockey East play. All the cards are on the table right now, so we gotta lay it on the line, which is what we tried to do (Friday).”

The Minutemen (7-15-3, 3-7-2 Hockey East) began the onslaught eight minutes, 10 seconds into the first period when Iacobellis scored a break-in one-timer off a feed from Conor Sheary for his 10th goal of the season.

Sheary carried the puck down the left circle off a Warriors defensive-zone turnover and fed the freshman with a pinpoint pass to beat Merrimack goaltender Rasmus Tirronen glove side. Iacobellis is the first UMass freshman to score at least 10 goals in a season since Pereira and Phillips both reached that mark in 2010-11.

The Minutemen doubled their advantage five minutes later when Pereira hit Power for a one-timer for his 49th career assist.

Phillips put UMass up 3-0 with 2.5 seconds left in the first period with a goal off assists from Colin Shea and Zack LaRue off another Warriors turnover.

“We don’t know the feeling of winning lately,” Sheary said. “To come into the locker room with a 3-0 lead is a huge thing for us.

“We had a lot of positive energy in the room. We’re not coming in there pouting, saying, ‘I didn’t get that goal.’ We put up three and we didn’t give up any so it really boosted us forward going into the second.”

Gracel scored his 10th goal of the season 5:23 into the second period to put the Minutemen up 4-0. Gracel passed the puck to Sheary, who possessed it behind the goal line and fed him right in front for another highlight-reel goal on a one-timer.

“We’re just trying to work on getting pucks to the net and being at the right place at the right time,” Pereira said of the goals. “Being in the slot helps you score some goals, but I think that’ll help us moving down the stretch looking back at this game.”

Merrimack (6-13-3, 1-7-2 HEA) finally broke through at 15:43 on a power-play goal by Chris LeBlanc to cut the deficit to 4-1. The Warriors attempted a comeback in the third period when Justin Mansfield beat Mastalerz high blocker side at 1:49 to make it 4-2, but it was stopped short when Josh Myers received a five-minute major and game misconduct midway through the third when Joel Hanley took a big hit by the Merrimack bench to halt any Warriors momentum.