UMass basketball closes out non-conference play with win at Elon 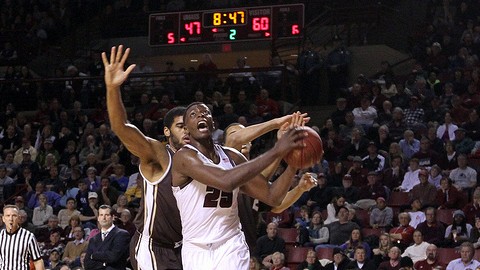 It was clear from the start that the Massachusetts men’s basketball team had a different look to it.

Unlike its last few games, it didn’t take long for No. 16 UMass to make its presence felt around Alumni Gym, as the Minutemen cruised to an 84-74 win over Elon in their last non-conference game of the season on Saturday.

It took the Minutemen all of five seconds to open the scoring, when Chaz Williams handled the opening tipoff and then threw up an alley-oop pass that Raphiael Putney slammed home. From that point forward, UMass (16-1) only continued to increase its lead.

“I thought being able to get comfortable with a lead was good because it gave us a little bit of a cushion,” UMass coach Derek Kellogg said in a radio interview following the game. “When they made a run, it was never like they took the game over. It was more along the lines like they were fighting to come back.”

The Minutemen halted any Phoenix run and opened up their largest lead of the second half at 14 points, thanks to consistent production down low from Cady Lalanne.

Lalanne led all scorers with 23 points and 10 rebounds, including 16 in the first half. Lalanne even showed his range, knocking down a 3-pointer just before the break to give UMass a 41-30 halftime lead.

In their past three games, the Minutemen were slow to start the second half. But the Phoenix (10-9) never came close to mounting a comeback. Elon never got closer than seven points in the final 20 minutes.
While the first half belonged to Lalanne, Williams took over the second half for the Minutemen.

He scored all 20 of his points in the second half, taking over the offensive load for UMass as Putney, Derrick Gordon and Sampson Carter combined for just 15 points.

“I thought Cady played huge (Saturday) and I though Chaz was great in the second half,” Kellogg said.

“We actually looked like we played with a good deal of energy (Saturday). I thought our defense was much more pronounced and we were sharper.”

The Minutemen entered Saturday’s game as the first-ever ranked team to go to Elon and knew full well that it wouldn’t be easy to walk away with the win.

“It was a pretty complete win and a tough road win,” Kellogg said. “They were 7-1 at home, so this is a tough environment to come in and come away with a victory.”

UMass handled the relentless Phoenix team and crowd by shooting an impressive 47 percent from the field.

With this game being a rare non-conference game scheduled at the beginning of the Atlantic 10 conference schedule, Kellogg said it was important for the Minutemen to come out with the same intensity as they would for an A-10 matchup.

“(We) did a very good job,” he said. “I loved their energy and I thought we paid attention to detail and for not having a ton of time to practice, I thought we were sharp.”

The Minutemen will complete their current three-game road stretch Wednesday at Richmond.