UMass basketball in midst of grueling A-10 schedule 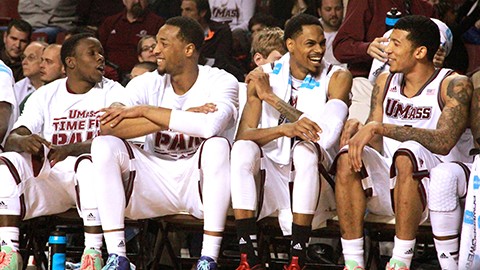 It’s no secret that once conference play begins in college basketball, the schedule becomes every team’s biggest enemy.

Teams have very few days off and usually play twice, sometimes three times a week. But, mix in the idea of having five out of six games on the road and that’s exactly what the Massachusetts men’s basketball team is dealing with.

UMass kicked off Atlantic 10 Conference play on Jan. 8 at home against Saint Joseph’s. It then followed that game with another home contest against St. Bonaventure. Then the Minutemen hit the grueling stretch of games that could wind up defining their season.

Beginning with George Mason on Jan.15 and ending with this Saturday’s game at the Hawks, UMass will have played six games in a span of 18 days with five of them on the road. Even for an experienced team like the Minutemen, that many road games can be hard to overcome.

“Five out of your six on the road is always a tough schedule, especially in a league like ours,” UMass coach Derek Kellogg said. “We’re just trying to stay the course. Really, worry about one game at a time and I think we’ve done a decent enough job of just staying day-to-day and not worrying about the prize that may be at the end of the tunnel.”

Traveling comes as part of the job for UMass, but even for a guy like Sampson Carter, who’s done it now for the better part of five seasons, it’s something that is tough to get used to.

“You can’t really get used to it,” he said. “Honestly, it’s a different type of game at home and on the road.”

The stretch of games was broken up into two separate road trips, the first being a three-game trip down south to Virginia and North Carolina and then these next two games being played in New York and Philadelphia. In between was a brief stop back at Mullins Center where the Minutemen routed Fordham by 38 points.

While it was nice for UMass to come back home and play in front of a sold out crowd, the stop wasn’t long enough for Kellogg and the Minutemen.

“I would’ve like a longer pit stop,” Kellogg said. “It was really just put your feet down in your own bed and your own house for a night and then move on to the next one. It’s a tough stretch, but every team in the country is going through a similar stretch at some point.”

Consistently playing on the road over the course of three weeks is enough of a challenge, but on top of that, UMass now knows that it’s going to get each team’s best challenge now that it’s in the national spotlight.

“Everywhere we go, everyone just wants to beat UMass because we have a name to us now,” freshman Seth Berger said. “So to be on the road is really hard because playing in another gym is never easy and conference games are never easy.”

So far the Minutemen have lived up to the challenge of the grueling schedule. They went 3-1 in the first four games of this six-game stretch including 2-1 on the road. With the final two stops coming against two teams that it narrowly beat earlier in the season, UMass knows that these games will show what exactly it’s made of.

“This is going to be a great test,” Carter said. “They’re going to show our toughness, our leadership skills. It’s going to show how we can fight adversity together.”