UMass basketball looks to bounce back at St. Joe’s 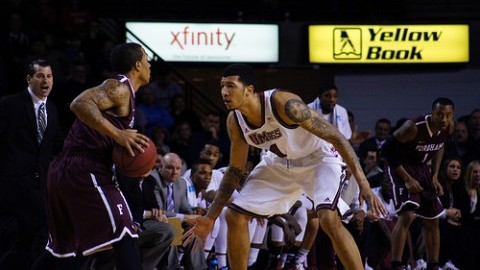 PHILADELPHIA—The No. 21 Massachusetts men’s basketball team hasn’t had to worry about rebounding from losses too often this season.

That’s one of the many upsides about being 17-3. But as UMass prepares for its game at Saint Joseph’s on Saturday night, it will look to avoid its first losing streak of the season.

After losing by 13 to St. Bonaventure on Wednesday night, the Minutemen (17-3, 4-2 Atlantic 10) will wrap up arguably their toughest stretch of games to date against the same Hawks team that nearly upset them on Jan. 8.

“They’re a good team,” UMass coach Derek Kellogg said. “They’re one of those teams that could win the league and I thought that to start the season. They played like a senior, more mature college basketball team. They shared the basketball, they didn’t get rattled too much by our pressure, they made us work for everything and took care of the ball.”

In that game, St. Joe’s (14-6, 4-2 A-10) led by as many as nine points at Mullins Center, before UMass came storming back and defeated the Hawks, 66-62. The key for the Minutemen this time around is to get off to a better start and avoid falling behind, and that will require dominating the glass.

“They got a couple offensive rebounds that got kicked out for 3’s for (Langston) Galloway that I thought hurt us,” Kellogg said. “And I think (Halil) Kanacevic did a great job dominating the paint on the offensive end of the floor.”

Slowing down Kanacevic will be a priority this time around for the UMass. He torched the Minutemen for 19 points and 13 rebounds in the first meeting, while playing all 40 minutes.

Despite being 6-foot-8, Kanacevic is someone who likes to step outside and knock down outside shots, meaning that whoever guards him will have his hands full.

“He handles the ball out on the perimeter, so I think it’s a pretty good matchup,” junior Cady Lalanne said. “I think he’s a pretty good player and Chaz (Williams) thinks highly of him and seeing what he did last game, I think he did a pretty good job.”

But regardless of what happened in the first meeting, the one major difference this time around is location.

Friday’s game will be at the Hawks’ home court, Hagan Arena. UMass has lost its last two games away from home and had even more trouble when games were played in smaller gyms. So, with Saturday’s game taking place in a smaller venue — about half the capacity of Mullins Center — the Minutemen will need to control the crowd early.

“(It’s) a road game; another sold out arena,” Kellogg said. “This is really what college basketball is all about. Trying to win in tough environments and seeing what your team is made of.”

Kellogg added that this is the time of the season when players need to step up. UMass hasn’t been nearly as sharp as it was earlier in the season, but with the season winding down, now is when the mental focus of the team needs to be at its peak.

The Minutemen have had a target on their back for the better part of two months after cracking the Top 25 in November. But after dropping in the rankings this week and the possibility of being unranked come next week hanging in the air, this is by far the most adversity that UMass has dealt with this season and Kellogg is interested in seeing how his team handles it.

“We gotta little bit of adversity staring us in the face,” he said. “I don’t think our overall record at ‘Hawk Hill’ has been fantastic over the last 15 years… So I think it will be a true test for our team to see how we respond…I’m looking forward to the game to see how we respond in a tough environment.”