UMass construction to continue through 2017 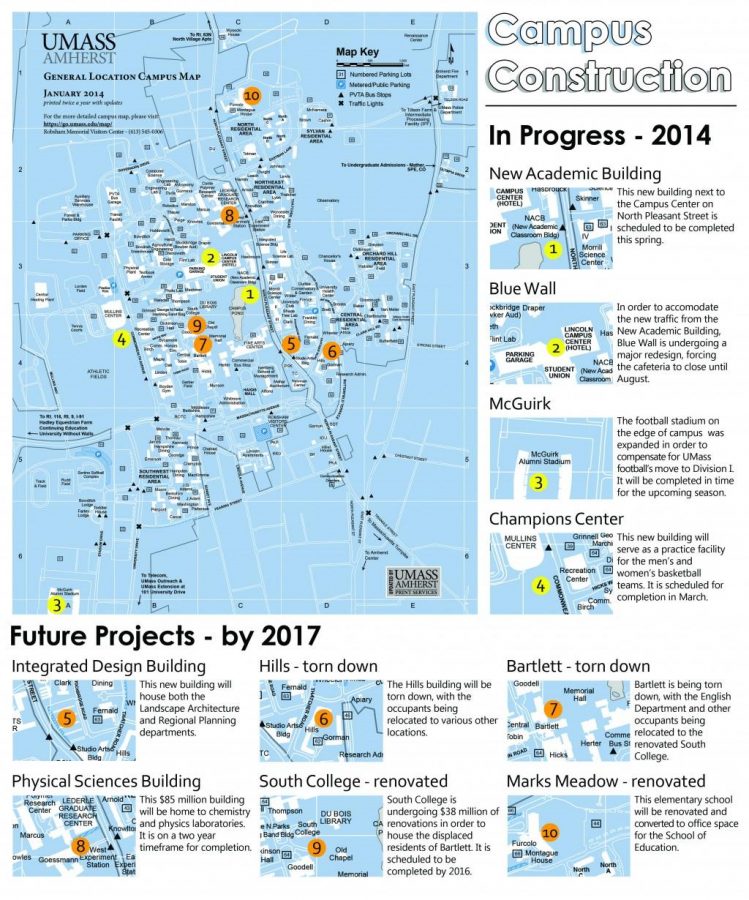 Construction at the University of Massachusetts shows no sign of slowing. With several new buildings on the horizon, it appears that the new Integrative Learning Center that is currently in progress will not be the last major project for the University next year.

Campus Planning Director Dennis Swinford acknowledged the opening of the new Commonwealth Honors College and Life Science Laboratories building this fall as well as several new projects that are currently in the design phase.

The Hills and Bartlett buildings, which are both over 40 years old, will eventually be torn down. Swinford pointed out this made more economic sense than repairing the buildings.

“Finding homes and making homes for the people in those buildings is a big part of what we’re doing now,”he said.

Swinford and his team are seeking out existing spaces around campus for the relocation of some of those people in Hills and Bartlett. Many will be moving into either the Integrative Learning Center or one of the new or renovated buildings being planned.

The Marks Meadow School by Furcolo Hall will become one of those homes. The money that the campus had been saving for deferred maintenance will contribute to renovations on the school in order to convert it to office space for people in the College of Education, currently located in Hills.

“This will be a great project because it’s a nice new facility for all of them,” Swinford said.

The renovations are expected to begin around the end of this year and will be completed by 2016.

Another new building planned for next year will take care of a large majority of other inhabitants in Hills– the Integrated Design Building, which will house the department of Landscape Architecture and Regional Planning department as well as the Architecture and Design and Building Construction Technology programs.

“Landscape architects and regional planners often work together out in the real world,” Swinford said. “So this is a great opportunity to bring all of these programs together in one place now.”

The $50 million Integrated Design Building is scheduled to begin with a similar time frame to the Marks Meadow project.

“We are planning to have the hole in the ground within a year,” said Swinford, who hopes to have it ready for occupancy by 2017.

South College will also undergo about $38 million worth of renovations within the year. A new building that will be connected to the college will house a large amount of the English department that is currently in Bartlett. The remainder of those in Bartlett will relocate to the Integrative Learning Center or existing spaces around campus.

Already in process is the Physical Sciences Building located near North Pleasant Street and West Experiment Station. This 350,000 square-foot building will be used for research laboratories for chemistry and physics. The project will be funded by the state with about $85 million. It is part of a campus master plan that was initiated several years ago in order to fulfill the campus’ mission to upgrade its science facilities and be more competitive with scientific research. Swinford anticipates a two-year time frame for this building’s construction.

With the amount of bulldozers and blocked walkways already around UMass, some students may be wary of further construction projects making it difficult to get around the campus. Swinford assured that aside from some inevitable noise, the construction will not be significantly disruptive. He looks forward to the new additions and renovations as an exciting future for UMass.

“It is definitely rare to have this many construction projects going on,”he said,“but they are all meant to increase the quality of life for students and make their experience better.”

Kate Leddy can be reached at [email protected]mass.edu.