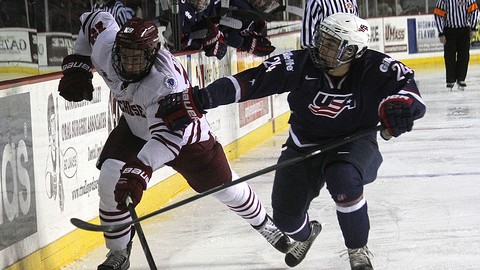 What do UMass Lowell, Boston College, Boston University, Merrimack, Northeastern and the Massachusetts hockey team all have in common?

Considered by far the weakest of the six Division I conferences in college hockey, AHC teams rarely find themselves on the winning end in their non-conference slate, but have found some relative success so far this season.

On Tuesday, the Minutemen won the race to two losses to AHC teams in 2013-14, falling to American International 3-2 in front of 1,167 at Mullins Center in their final non-conference game of the season. It was AIC’s first-ever win over a Hockey East opponent.

UMass (6-15-3) outshot the Yellow Jackets by a whopping 59-18 margin for the game, but could only beat AIC freshman goaltender Hunter Leisner twice in the contest.

The Minutemen fired 114 shots and hit three posts, but Leisner carried the Yellow Jackets with a super-human effort.

“It can be a fickle game sometimes” UMass coach John Micheletto said. “We had 114 launches, 59 shots on net, we won the special teams battle, won in the face-off dot and we don’t win the game. We gotta finish. I do know that.

“At the end of the day I’m very disappointed at the outcome, especially since I was happy with a lot of the things we did over the course of the play” he continued. “Usually the end result dictates your opinion of everything else. Obviously their goaltender had a pretty good night.”

It didn’t help the Minutemen that they were without one of their best passers and pace-setters in freshman Ray Pigozzi, who also missed Sunday’s exhibition versus the U.S. Under-18 National Team with an undisclosed ailment.

Defensively, UMass held AIC (6-14) to just 18 shots for the game, but defensive breakdowns, particularly in the third period, left Steve Mastalerz (15 saves) helpless between the pipes, which ultimately led to the Yellow Jackets’ game-winning goal.

With the game tied at 2-2 14 minutes, 40 seconds into the third period, Jon Puskar blocked a shot and the puck popped out and onto the stick of David Norris, who led a 2-on-1 break with Alexander MacMillan. Norris fed MacMillan with a cross-ice pass right to his stick and the junior buried the puck into an open net to give AIC a lead it wouldn’t relinquish thanks in large part to its freshman net minder.

Leisner made a number of quality stops, especially when he faced a 27-shot barrage in the second period, but also had plenty of opportunities come right at him while he was already in position.

“It’s definitely up there with the most I’ve ever had,” Leisner said of the 59 shots he faced. “The team, they kept a lot of them out to the side. Probably about 15 to 20 of them were very routine saves where the team really helped me out, especially with a few blocked shots that were key right in the slot.”

A lack of crowd noise made for a slow start to the game, but the Minutemen still dominated the first period in terms shots – they held a 15-6 edge in the first 20 minutes – and had plenty of good chances, including a Ben Gallacher attempt that hit the post and a Brennan Baxandall shot that hit off an AIC defenseman and beat Leisner, but was ruled no goal because he ran into and dislodged the net before the puck could finish its slow journey past the goal line.

Michael Pereira netted the game’s first goal first 5:13 into the second period on the power play on a snap shot from the right circle.

The Minutemen’s active scoring leader, Pereira’s goal puts him two away from 50 for his career and four points away from 100. It was also his 18th career power-play goal, tying him for third on UMass’ all-time list.

AIC answered just two minutes later when Jason Popek beat Mastalerz unassisted to tie the game at 1-1, and pulled ahead at 11:54 when Mike Dietrich scored a pretty goal on the rush to take a 2-1 lead. Dietrich received a pass from Nathan Sliwinski, worked his way up ice and faked his way through the UMass defense before ripping a shot past Mastalerz for his first career goal.

UMass tied the game 4:46 into the third period when Steven Guzzo put home a rebound after Leisner made a kick save on Brandon Wahlin’s initial shot from the right wing.

UMass doesn’t play again until Jan. 24 against Merrimack, leaving them 10 days to dwell on a very low point for the program.

“We wish we could get back at it tomorrow night,” Conor Sheary said. “I know these guys in the room aren’t going to quit, but it’s the will to get back at it. It’s gonna be hard for 10 days at least.”