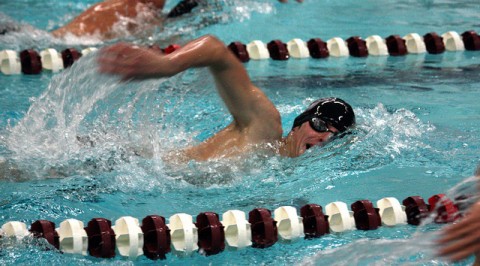 With the Atlantic 10 Championships rapidly approaching, the Massachusetts women’s swimming team needed a big performance before heading into the postseason tournament.

It got just that on Saturday when the Minutewomen defeated Bryant 162-100, winning 11 out of 14 events in the victory.

The underclassmen led the way for UMass, with sophomores Rebecca Quirie and Jocelyn Yuen and freshman Meriza Werenski each winning three events, including the 200-meter medley relay. UMass coach Bob Newcomb was proud of the way his team bounced back, especially after a tough performance in the Rhode Island Invitational the week before.

“I’m very happy with the way they performed, especially after coming off a very challenging training schedule,” Newcomb said. “While they are still very tired, I think they are starting to adapt to things and won a very significant meet.”

Newcomb was full of praise for his two sophomores, who he said continue to work hard in training and perform well for UMass.

“I thought both of them were exceptional out there,” he said. “Rebecca looks very strong and positive right now, and things are coming together really well for her. Jocelyn is extremely tough and the intensity of her training is definitely paying off.”

With only two meets until the A-10 Championships begin in February, UMass is focused on taking it one meet at a time and making the most out of the next few meets.

“They know each meet is going to get better, and are ultimately looking at the A-10’s at this point as an opportunity to become stronger,” Newcomb said.

The Minutewomen travel to Vermont this weekend for the Dartmouth Invitational, starting Friday at 5 p.m.

The UMass men’s swimming team dominated its meet against Bryant, winning 10 races on its way to a 178-84 victory on Saturday.

Just one week after finishing in first place in the Rhode Island Invitational, the Minutemen won both butterfly races, and also came out on top in five out of six freestyle races, won both backstroke races and the 200-meter medley relay.

UMass swept in two events throughout the meet, earning the top three places in the 100-meter backstroke and the 200-meter freestyle. Freshman Heath Maginn came in first in both backstroke races, while senior Troy Nichols won the 200-meter race.

Winning the 200-meter freestyle relay for UMass was the team of Conway, Karpinski, Stiles, and junior Ryan Bobianski. For the 200-meter medley relay, it was Luong, Karpinski, senior Chris Inglis and freshman Alex Mesisca who got the win and 11 points for the Minutemen.

The UMass men’s team will also be competing in the Dartmouth Invitational this weekend, as it looks to win its third meet in a row.