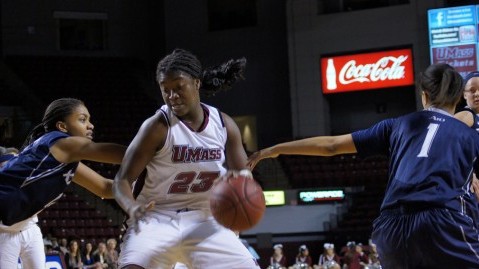 Basketball is a game of runs.

Often times the team that strings together more runs comes out with the win. Tonight that formula lived up to expectation as the Massachusetts women’s basketball team (3-17, 0-6 Atlantic 10) lost its 10th straight game, falling to Dayton 81-67.

Every time the Minutewomen strung together a few good offensive possessions in a row, the Flyers (12-4, 5-0 Atlantic 10) answered right back with a bigger and stronger counter punch.

“I thought our defense was pretty solid,” UMass coach Sharon Dawley said. “My only issues on defense was with our transition defense. A couple times we got lost in the transition game. We were in the right spots, but we just got lost.”

Dayton guard Andrea Hoover, a member 2013-14 Naismith Trophy player-to-watch list, drilled a three-pointer with 4:56 remaining in the first half sparking a 13-0 Flyer run.

Despite averaging 16.8 points per game, the three-pointer was Hoover’s only basket as she went 1-for-3 from the field, all from behind the arc.

“In the half court we did a really good job, especially on the perimeter,” Dawley said of her team’s defense on Hoover. “Our perimeter defense was pretty solid, but in the post we needed to do a better job coming out and not letting them get the block.”

Dayton outscored UMass 44-24 in the post as Ally Malott and Jodie Cornelie each had their way with the Minutewomen frontcourt.

After getting off to another slow start, UMass trimmed the Flyers lead to just four, but Nola Henry missed a wide-open layup that led to a transition three-pointer from Amber Deane giving Dayton the 17-10 lead. From that point forward, everything started going the Flyers’ way.

Leading the way for the Minutewomen was Rashida Timbilla and Kim Pierre-Louis. Timbilla finished with 10 points and nine rebounds, while Pierre-Louis tallied a double-double, scoring 20 points while grabbing 12 rebounds.

“I thought both (Timbilla) and (Pierre-Louis) played really well, “Dawley said. “More importantly, I thought (Timbilla) did an excellent job moving from the point, to the three, and finally to the four.”

That wasn’t the first time Timbilla has moved around. She started off the season playing power forward, but was eventually moved to point guard after Henry struggled early in the year.

“Whatever the team needs, I’ll do,” Timbilla said. “Coach Dawley does an excellent job of letting me move around in practice so that definitely helps me.”

Pierre-Louis got off to a hot start making six of her first eight field goals, all of which came from attacking the rim.

“I’m a bit shorter (than most centers),” Pierre-Louis said. “I think that the fact that I’m stronger than a lot of the other girls helps me. I’m able to take the contact and finish.”

Late in the second half, UMass center Paula Tarnachowicz landed awkwardly on her right ankle forcing her to come out of the game. Her screams echoed the dead silent Mullins Center as she was eventually carried off the court by the training staff.

Following the game, Dawley didn’t have much to say about the injury – only that Tarnachowicz was getting looked at by the trainers and would have a better idea of the severity over the next couple of days.

The Minutewomen continue A-10 play this Saturday at 7 p.m. as they travel to Fordham.