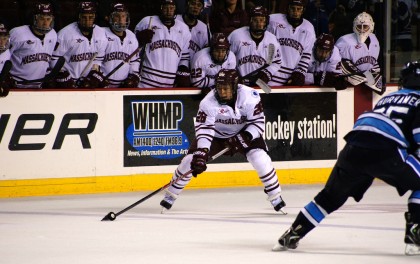 BOSTON – The Massachusetts hockey team could highlight a variety of different reasons for its losses this season.

Whether it be poor defensive play, a lack of goal-scoring or questionable officiating, the Minutemen (6-14-3) have found just about every way to lose in a year filled with disappointing outcomes.

In the last two games, it’s been untimely penalties.

On Monday, Branden Gracel took a hooking penalty late in the third period that led directly to Billy Latta’s game-winning goal in UMass’ 2-1 loss to Connecticut.

On Saturday, the Minutemen took three penalties in the third period that quickly turned a 3-2 lead into a 4-3 loss at Northeastern.

UMass had all the momentum on its side Saturday night. A lineup change sparked the Minutemen’s offense, and Gracel’s second goal of the game in the closing minutes of the second period put UMass ahead 3-2 entering the third period.

But that momentum was quickly erased when Gracel was called for hooking 18 seconds into the third period. The Huskies spent the next two minutes in the attacking zone, and goaltender Steve Mastalerz wasn’t relieved of the pressure until 12 seconds after the penalty was killed when Mike McMurtry scored from in front to tie the game at 3-3.

The Minutemen were a man down again a little more than two minutes after the tying goal when Brandon Wahlin took a hooking penalty in the defensive zone. Northeastern capitalized 43 seconds later on Cody Ferriero’s goal from out near the point to give the Huskies a 4-3 lead it would not relinquish.

“We obviously can’t take four stick fouls – three penalties in the third period – on any night and expect to have winning results,” UMass coach John Micheletto said. “Unfortunately we gave away an opportunity where we scored three goals and didn’t want to do the details that make winning teams win.”

The Minutemen’s third penalty of the period also came at an inopportune time. And once again it was Gracel who found himself in the penalty box.

UMass was 58 seconds into a man-advantage when Gracel took a slashing penalty after getting tangled up with a Northeastern defenseman in the attacking zone.

Gracel had his hands up in disbelief after the call was made. But regardless of whether or not it was the right call, it ended the Minutemen’s best chance to tie the game.

“I don’t really agree with the calls, but if I didn’t have my stick up they wouldn’t have called that penalty, so it’s a lesson learned for me,” Gracel said. “I can’t be doing that.”

UMass’ fast, aggressive style of play both offensively and defensively makes it susceptible to taking penalties at a significant rate. The Minutemen have a combined 342 penalty minutes this season, which is most in Hockey East, and average about 14.9 penalty minutes per game.

However, UMass also has the worst penalty kill in the conference. The Minutemen have killed off just 79.5 percent of their opponent’s power plays, which has cost them games on numerous occasions this season, most notably on Saturday night.

“Lately I have been taking some penalties and I can’t be doing that,” Gracel said. “I wasn’t able to (Saturday), so I’m going try to forget about those and move on to the next weekend of games.

“That kind of stuff happens,” Gracel added. “You can’t blame the refs. I gotta keep my stick down and play my game.”

A lack of discipline mixed with a bad penalty kill is far from a good formula for success, and it’s something UMass keeps finding out the hard way. Until one of the two problems can be fixed, expect this pattern to continue for the Minutemen as the playoffs draw closer.