An inside look at Northampton based band The Sun Parade 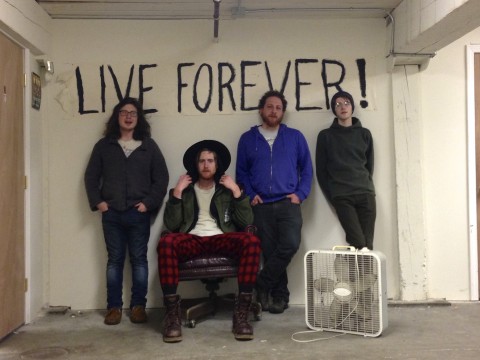 Four young men shuffle into an old warehouse in Easthampton, guitars and amps weighing down their arms. Flecks of snow vanish on their shoulders. They turn to follow the hallway as it bends left and left again beneath several bulbs that give off dim pools of light, past several doors decorated with posters, one optimistically proclaiming, “Live Forever!” The men arrive at an unassuming door in the corner.

Inside, a studio awaits them. Amps and microphones and a drum set huddle in the cozy bunker, a wreath of lights ringed around the ceiling. The men begin unpacking their instruments and putting them in tune as they discuss the Northampton music scene, some upcoming venues and their next EP. The bassist takes his perch on a pile of crates, the drummer takes his mark, the two guitarists nod at each other; they are ready. They launch into a new song.

The Sun Parade, a four-piece band from Northampton, began in 2011 as a trio of young musicians led by Chris Marlon Jennings. Jennings initially released an EP entitled “The Sun Parade” before his friend, Jeff Lewis, joined him as a second guitarist in 2011. Self-described as “roving Northern gents who blaze their guitars” on their website, The Sun Parade have maintained a loose and optimistic attitude since their inception.

Jennings chose the band name for its “positive and sunny” nature, and because “it can be any style of music. We kind of changed our style and are now locking into what we are. The Sun Parade kind of fits everything.” The songwriting team of Jennings and Lewis aim for upbeat, feel-good compositions with lyrics that sometimes reflect a more melancholy side.

“Everything we do has a duality,” Lewis explains. Their songs deal with both love and loss, as represented in the fan-favorite jam “Need You By My Side.”

Lewis first met Jennings in 2006, but their musical partnership did not develop until 2011, at which point the initial lineup consisted of Jennings, Lewis and bassist Jacob Rosazza. For the next two years, the band tried but failed to lock down a drummer.

Despite these trials, the band recently welcomed drummer Noam Schatz into the fold, rounding out a solid four-piece lineup. Before Schatz joined, the band went through four different drummers, none of whom could commit to a full-time band. Schatz had been seeking a solid lineup when he joined The Sun Parade in December. The Sun Parade’s new drummer has brought a fresh perspective to the blooming band, and Jennings excitedly reflects that now they can practice numerous times a week, rather than cramming rehearsal into the hours before a show with an uncertain roster. Schatz’s energetic presence is among the catalysts for the new era of The Sun Parade.

The changes have been noticeable. Recent concerts, namely a Nov. 6 show with Born Ruffians, have showcased the Parade’s new lo-fi sound with a more retro production quality employing louder drums and bass. Jennings has adopted the electric guitar for the new EP. Lewis references such acts as Elliot Smith, Dr. Dog and The Rolling Stones’ “Beggar’s Banquet” as inspirations for their new sound. They are a band well versed in the history of their inspirations, with a solid grasp of their own future rapidly coming into focus.

The Sun Parade released their debut LP, “Yossis,” at a very early stage in their career. Lewis explains that it was “more of a record out of necessity than out of inspiration.” “Yossis” is a very folky album, which Jennings wishes to move away from, instead expanding the band’s sonic explorations.

“The new Sun Parade is starting right now,” he says with a smile.

The Sun Parade loves to play free shows, which offer a laid-back atmosphere more akin to a house party of close friends than to a show with expensive tickets. This atmosphere fits well with The Sun Parade’s day-to-day attitude.

“We have to have good vibes at a show,” Jennings says, so they try to keep a low-key aura all the time, never concerning themselves with the financial constraints that playing music might present. Instead, they want to share their music and to inspire listeners.

“I never thought I’d be anything else,” Jennings explains. Once he picked up a guitar, Jennings knew no other careers would appeal to him. Similarly, Lewis’s passion was sparked early, at age nine.

Jennings says that “most of our songs just start with a groove – it’s like I have an idea with a rhythm.” From there, the musicians build a melody, and the words come last. Often, writing lyrics too early boxes them into a corner. Trying to come up with a groove that fits the meaning of their words rarely produces a track that the musicians are pleased with. Inevitably, this pattern leads to words that don’t fit, or to a melody that sounds too manufactured.

“It’s an emotional expression instead of an intellectual imposition,” Lewis says of the team’s writing.

Jennings and Lewis cite both Elliot Smith and the Beatles as inspirations for their own music. The band’s ultimate idol, however, is Dr. Dog. They love Dr. Dog’s lo-fi style, a sound that they aspire to perfect on their upcoming EP. Jennings remarks that to open for Dr. Dog one day would be a dream come true.

Native to Northampton, The Sun Parade has also played in Brooklyn, Cambridge and even California. However, as the banner on the band’s website declares, this band is a proud Northampton group, pioneering in “Northampton folk rock.”

The Sun Parade has played regularly at local spots like The Iron Horse and Pearl Street, but the band aspires to play at far bigger theaters. They mention several venues like Red Rocks in Denver as appealing places to play music. Recently, The Sun Parade opened for Lake Street Dive in Cambridge at the Sinclair.

The band is currently hard at work on their new, untitled EP. The EP officially marks the new era of The Sun Parade, a band excitedly pursuing a lo-fi sound truer to both their interests and their aspirations. Jennings says they hope to release a single soon, tentatively titled “Tonight’s Gone Away.”

Until the EP drops, the Sun Parade plans to keep honing their talents and to play a variety of shows. But even as their sound changes, their attitudes will stay true to their origins. Jennings says they will always love playing music for the experience it offers themselves and their fans.

“There is nothing like the feeling of playing something on stage and seeing someone smile.”