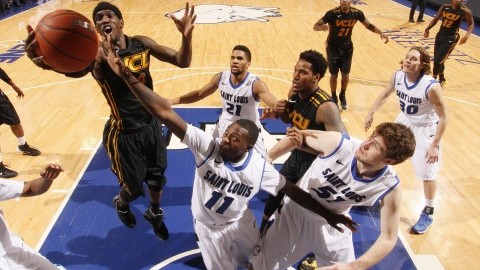 On Sunday afternoon, the Saint Joseph’s men’s basketball team earned a victory over crosstown-rival La Salle, holding off a late charge from the Explorers. Each of the Hawks’ starters contributed at least 10 points in a 75-64 win.

Saint Joseph’s was led by Langston Galloway, the fifth leading scorer in the A-10, who scored 18 points. DeAndre Bembry added 16 points, five rebounds and three steals while Halil Kanacevic and Ronald Roberts Jr. combined for 26 points.

La Salle’s Jerrell Wright, Tyreek Duren and Tyrone Garland were responsible for 46 of the Explorers’ 64 points. Wright had nine offensive rebounds and finished the game with 15 total boards.

La Salle will face Dayton on Wednesday, while Saint Joseph’s will challenge Rhode Island, which is tied for last place in the A-10.

Saint Louis defeated Virginia Commonwealth 64-62 on Saturday in a battle between two of the A-10’s top teams.

Dwayne Evans scored 21 points for Saint Louis on 8-for-13 shooting from the field and added 10 rebounds in 33 minutes of play. Rob Loe, Jordair Jett and Mike McCall Jr. combined for 40 points. Jett also had five assists and six rebounds.

The Billikens’ bench was virtually non-existent as three players only scored two points in 29 minutes of combined play.

The Rams had three players in double figures. Briante Weber led the VCU charge as he grabbed nine rebounds and collected five assists to go along with his 12 points.

The Rams will travel to Massachusetts on Friday while Saint Louis will take on George Mason as it looks to keep its perfect A-10 record intact.

Despite losing 83-71 to Duquesne, Rhode Island freshman E.C Matthews posted a career-high 32 points on 11-of-15 shooting.

Matthews was responsible for bringing the Rams (11-15, 2-9 A-10) within four points of the Dukes (11-13, 3-8 A-10) at the onset of the second half after scoring nine straight points. But the Rams couldn’t catch up to Duquesne in a battle between two of the conference’s worst teams.

Ovie Soko registered a double-double for the Dukes with 19 points and 12 rebounds and L.G. Gill added 19 points from the bench in only 20 minutes of action. Soko scored 15 points in the first half as the Dukes held a 42-34 lead at halftime.

URI shot a mere 52 percent from the free-throw line, only making 13-of-25 attempts.

On Wednesday, the Dukes will travel to New York to face St. Bonaventure. The Rams will host Saint Joseph’s on Wednesday.