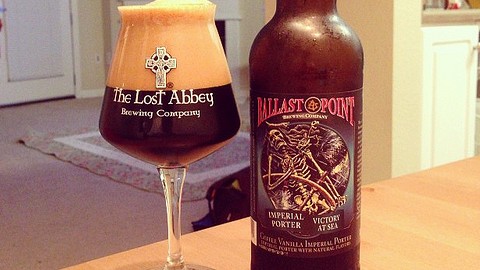 Like many seasoned New Englanders, I am sometimes all but overwhelmed by the urge to adopt the hermit lifestyle in the winter and not leave the warm sanctuary of my house for anything other than essentials. Unfortunately academic and financial obligations always pry me from the comfort of my bed and out into the frozen tundra for one engagement or another, so I have to craft my warmth in more creative ways. While a stiff shot of whiskey is certain to always thaw the blood, those of us with a passion for the brew find ourselves turning to the darker varieties of beer to stave off the deep chill of the season. Now I will never turn my nose up at a good crisp IPA, but when the temperature descends into the single digits and the wind chill comes equipped with a negative persuasion, my taste palate tends to fall more on the malty side as I find myself craving stouts and porters. Long cold nights beget strong dark beer, and the season of the swill is in full swing.

On my most recent beer-hunting expedition, I happened on the Victory at Sea Imperial Porter from the San Diego, Calif.-based Ballast Point Brewery. Having grown up on the shores of Cape Cod, I am naturally a sucker for the consistent aquatic theme perpetuated by much of Ballast Point’s brews and labels, and their Sea Monster Imperial Stout was one of my favorite dark beers of the last year. Though initially drawn to Victory at Sea for the grim caricature of a naval skeleton on the label, the added slogan of an imperial porter, “brewed with coffee and vanilla,” was enough to solidify my decision. As many regular readers of this column are aware, I am an unabashed coffee fiend, so naturally my favor is easily won by any beer that uses it in the brewing process.

Right off the bat, this beer won my good graces because the aroma was almost overpoweringly bitter—the distinct scent of strong coffee is readily apparent once the cap has been popped, augmented by the heady scent of malt underneath. Pouring out a near pitch black, this hearty porter comes equipped with a creamy tan head that dissipates gradually, leaving behind thick ropes of lacing. The thickness of this brew is noticeable when swirled around in a pint glass, revealing little to no clarity and further distributing the dissipated head. Much like drinking molasses, drinking this beer gives a distinctly full taste in the mouth that leaves the tongue feeling thick with malt. An equal playing field of bitter coffee and sweet vanilla floods the taste buds, followed by a heavy malt sensation in the aftertaste. While the alcohol content is not readily tasted, the effects of the ABV are felt shortly after the first swig. The fullness of the malt composition mixed with the bittersweet tang of flavored coffee makes for a wallop of taste that falls somewhere in the happy medium between smooth drinkability and swill-worthy. However, at 10 percent alcohol content, Victory at Sea is not a beer to dealt with lightly—I speak from personal experience when I say that one 22 oz. bottle is likely more than enough for one night.

Aside from a seasonal weakness for dark beers, what really captured my heart about this brew was the expert blend of bitter and sweet that balanced out in the aftertaste. The subtle art of combining coffee and beer is, in this beer geek’s opinion, highly underrated, but Ballast Point has crafted a beer that manages to seamlessly merge the delicate essences of bitter coffee and sweet malt. A coffee-infused beer is a bold enough wager, but to add the zing of vanilla to the formula is commendably bold and, in this case, flavorfully successful.

If your inherent sweet tooth spurs you to avoid the bitterness that is characteristic of craft beer, Victory at Sea may just tempt you to the dark side with its subtle balance of acidity and sweetness. Though it is by no means a light drinking experience, this delectable brew is sure to bring comfortable warmth to your gullet during the bitter nights that lay ahead. So if naval-themed beverages or porter-style beers are your passion, Ballast Point’s Victory at Sea is the ideal drink to keep your taste buds satisfied. Just be sure to avoid any strenuous activity following your consumption, or the only victory you’ll be experiencing is that of intoxication.

Emily A. Brightman can be reached at [email protected]