UMass baseball swept by Army to open the season 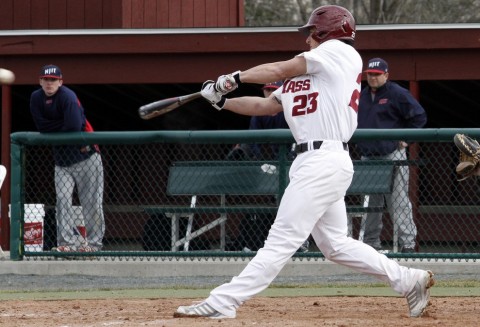 The Massachusetts baseball team broke ground on its 2014 campaign this weekend at the USA Baseball Complex in Cary, N.C., but experienced less-than-desirable results.

The Minutemen  fell to Army three times, dropping Sunday’s affair 7-3 and losing both ends of a Saturday doubleheader. UMass was outscored 25-6 over the three-game sweep, including a 14-0 loss in its season opener.

Knotted 3-3 entering the top of the seventh inning on Sunday, the Black Knights exploded for four runs and took command of the victory. The Minutemen loaded the bases after allowing a leadoff double to Army’s Brock Davidson and hitting Grant Van Orden and Jon Crucitti. Harold Earls cleared the bases with a double to the gap in left-center field.

Conor LeBlanc started for UMass and lasted 6.1 innings, allowing six hits and four runs (two earned). He was charged with the loss and replaced by Tim Cassidy.

“(Leblanc) pitched well,” UMass coach Mike Stone said. “He left the ball up to the leadoff man and I felt it was time to make the change, but things didn’t go our way after doing that.”

Mike Geannelis paced the Minutemen (0-3) at the plate, going 2-for-4 while driving in two runs. His two-run double in the bottom of the sixth brought UMass within a run, making it 3-2. Geannelis later scored on a sac fly by Adam Picard, which tied the game.

UMass came within 180 feet of tying the second game of its Saturday doubleheader, but couldn’t finish a rallying effort in the ninth inning, losing 4-3.

The Minutemen entered the ninth trailing 4-2, but catcher John Jennings opened the frame with a single. Paul Yanakopulos pinch ran for Jennings and eventually scored on an RBI single from centerfielder Kyle Adie, who knocked in Yanakopulous with one out in the inning.

But Adie never advanced past second base. Army brought in reliever Johnny Griffith to face Brandon Walsh and Picard, both of whom struck out. Adie was left stranded in scoring position.

The loss spoiled eight strong innings from freshman Ryan Moloney, who made his first career start at pitcher for the Minutemen. Moloney scattered five hits over those eight innings, allowing all four runs. Only two of those runs were earned. Stone said Moloney’s performance was “tremendous.”

“We had a pretty good idea he was going to be a strike thrower,” Stone said. “But to pitch deep into the game like he did was a real bonus for us. He pitched well enough to win the game.”

Army’s Jon Crucitti opened the scoring, knocking home Daniel Cortes on an RBI-single in the third inning. But UMass answered in the bottom half, taking advantage of a Black Knights error on a Dylan Begin sacrifice fly to score Nick Sanford and Picard.

Army tied the game in the fourth inning and took a 4-2 lead in the top of the eighth, setting up UMass’ comeback attempt in the ninth inning.

The Black Knights wasted no-time jumping on a UMass squad making its season debut, scoring five runs in the first three innings to register a 14-0 victory in the first game of Saturday’s doubleheader.

Minutemen starter Brandon Walsh was chased without recording an out in the second inning. He allowed four runs despite giving up just a single hit. He walked three batters and hit another. UMass struggled with control all weekend, hitting 12 batters over three games.

“You don’t really expect (the lack of control) because you’re throwing bullpens for five and a half weeks,” Stone said. “You don’t think they’re going to go out there and not command the zone like we should, but that happened on a number of occasions.”

UMass struggled at the plate. Jennings picked up the Minutemen’s only hit of the game while Scifo, Picard and Kellen Pagel reached base via walk.