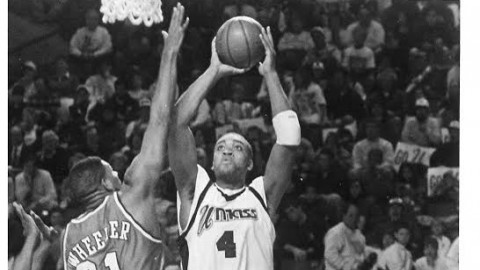 On his 37th birthday, Lari Ketner took his wife Aquarius out to the local mall near their home in Indianapolis and did a little shopping.

Accompanied by Aquarius’ brother and his wife, the two spent all day together. They walked around, they ate lunch, they talked, they shopped. They even had time to stop and get Aquarius – who was celebrating her own 37th birthday the day after Lari’s – a new outfit for the next day at church, where they were greeted with a surprise party.

It all seemed so simple, so ordinary, only it wasn’t.

Milestones have been few and far between for Lari Ketner these days. The former Massachusetts men’s basketball star was diagnosed with Stage 4 colon cancer on Aug. 28 last year, and it’s been a difficult, uphill battle toward recovery ever since.

It’s what’s made moments like the birthday weekend he shared with his wife on Feb. 1 and 2 that much more special. For Ketner, it was the first time he was able to spend time like that with his wife since before the diagnosis.

“With the medicines and everything I can’t really walk around a lot without getting tired,” Ketner said. “But (on my birthday) I was able to walk around for a while, go to the mall, go eat, things of that nature.

“It was just a great time.”

And he hopes there are several more great times ahead.

Prior to his diagnosis, Ketner, who played basketball at UMass for three seasons from 1996 to 1999, had lived a mostly healthy life.

Cancer was most certainly the last thing on anyone’s mind, especially Ketner’s.

“I was pretty healthy,” Ketner said. “Hadn’t been to the doctor. I didn’t even really catch a cold.”

But one day last year while working for the postal service in Indianapolis, Ketner started experiencing pains in his stomach and often couldn’t keep his food down.

So he and his wife took a visit to the doctors. At first, Ketner said, “they associated it with acid reflux, or something of that nature.” But after trying a few different kinds of medicine, the results continued to persist.

Eventually, Ketner saw a new doctor, who performed a colonoscopy and biopsy, but there weren’t enough results in those tests that came back to determine what was the matter.

The doctor then performed a CAT Scan, and that finally revealed what was wrong: “I had three legions in my stomach area,” Ketner said. “It was cancer.”

Once Ketner was diagnosed with Stage 4 colon cancer, the chemotherapy and treatment plans began immediately.

Less than a week after his diagnosis, Ketner married his wife Aquarius on Sept. 3. The next day, he went in for a surgery to remove a third of his colon.

Since then, it’s been a long road to try to recover and beat the cancer.

Ketner healed for the first 20 days after the surgery before beginning chemotherapy treatment, which, at the time, consisted of five different medicines. He underwent that first treatment for eight weeks.

After those eight weeks were up, Ketner received another CAT Scan test to see how the medicine was affecting the tumors, but he soon found out that the tumor in his liver had actually grown over that time period.

Immediately, Ketner’s doctors changed his chemo plan to provide a more aggressive medicine. At first, they wanted to use radiation, but, Ketner said, he isn’t eligible for radiation because he had two tumors in both his liver and abdomen.

“It’s not associated with one place, so they didn’t want to do the radiation,” Ketner said.

So far, the results have been positive, Ketner said. He’s the second person to receive one particular medicine that he’s being treated with, and he said the first person to get it “had really, really good results.”

In the meantime, Ketner is out of work and can’t do much. During his first chemo plan, he couldn’t be exposed to any cold weather, couldn’t drink anything cold or touch anything cold.

“They just wanted me to relax, eat right, do what I need to do and take my medicine and everything,” Ketner said. “The chemotherapy kind of knocks me out a little bit, so for like three days I can’t do anything because of fatigue and the different side effects.”

One thing he has done, though, is work toward finishing his degree online through UMass’ continuing education program. He just recently finished a multicultural psychology course, and he’s expecting to complete a double degree in elementary education and psychology this summer. He only has three more classes to take.

Even though the cancer has taken a lot out of him, Ketner is doing his best to not let it take over his life in a negative way.

From close family members and friends to people he doesn’t even know, one thing is clear: Ketner has been provided a far-reaching and strong support system throughout this entire process.

In his immediate family, Ketner is supported by his wife Aquarius and his two sons – the older being 12 years old, the younger one 8 – who have all been a driving force in his road to recovery.

“My wife has really, really been great,” Ketner said. “She’s taken pretty much all of the responsibilities that we once shared and now she’s taking care of me and taking care of my sons, running the house, she’s been working two jobs. She’s been great. She makes sure I eat right, makes sure I get to all of my appointments. I really can’t put into words everything that she’s done. She’s done a lot.”

Beyond his family, though, there’s been one man who has made it his own personal mission to help Ketner as much as he can – Bob Otrando.

Otrando has been a strength and conditioning coach for 21 years at UMass, where he has worked in every sport. That includes basketball, where he immediately formed a relationship with Ketner when the player arrived in 1995 that has forged into a tighter bond more recently.

Ketner was ineligible to play as a freshman in the 1995-96 season due to academics, which meant more time in the weight room with Otrando, who was immediately excited to work with the 6-foot-10, 280-pounder.

“He was a real hungry kid when he came in here,” Otrando said. “He was like a Frankenstein model. He walked through the door, he had a big body, he was strong, he was flexible. It was like we could do something with this guy. I was excited to work with him and he was coach-able, so that always makes it nice.”

Ketner went on to play three years at UMass under then-coach Bruiser Flint. He averaged double figures in scoring each year and ranked third all-time in blocked shots when his career was over. He was then drafted 49th overall in the 1999 NBA Draft by the Chicago Bulls. He played a brief two-year stint in the league with the Bulls, Cleveland Cavaliers and Indiana Pacers.

It wasn’t until 2006 when he and Otrando re-connected. Otrando was back working basketball with then-coach Travis Ford and the two met in Otrando’s office, where they caught up and reminisced about when they worked together at UMass.

After that, Otrando said, they talked about once a year, but it wasn’t until last year when Ketner found Otrando on Facebook and friend-requested him. In August, Ketner told Otrando about his colon cancer diagnosis and Otrando was immediately taken back.

“I was shocked, and then when he told me it was Stage 4, it was like a bullet hit you,” Otrando said. “It just stops you in your tracks.”

Otrando became “very concerned” about his former pupil, and so he kept reaching out to him over the months through Facebook.

Then, one morning, as he was walking his dog outside, Otrando decided he wanted to take action and help Ketner somehow, some way. He didn’t know how quite yet, but his friend’s condition was weighing on his conscious, and he wanted to do something, anything.

“With me, I walk my talk,” Otrando said. “When I was single and I didn’t have a family, those kids were like sons and treated me like family, and it doesn’t stop. Now that I’m married and I have kids, I have an immediate family, but my wife also knows if I have a former athlete that needs help, that’s what coaching is all about. For me it was never about moving on to the next job and using kids to get a record. I develop a relationship with them.

As strength and conditioning coach, it’s Otrando’s job to challenge his athletes. But this was a whole new challenge.

Otrando wanted to raise money to help alleviate the financial burden that Ketner and his family faced as a result of cancer treatments and hospital bills. But he wasn’t quite sure how to go about it. At first, he said, he was just going to have people send checks to him.

That’s when Kimberly Lamson came in. Lamson is a former UMass field hockey standout who played at the same time Ketner did and became friends with him. She heard about what Otrando was trying to do, reached out to him and suggested to create a donation page on GoFundMe.com, a crowd-funding website that collects donations for different causes.

“I had no idea what Go Fund Me was,” Otrando said. “I can’t fund myself, never mind someone else.”

Lamson created the page, came up with the wording, worked with Ketner’s wife to figure out how their family could access the money and suddenly, the “We Love Lari Challenge” was live.

“It sure as heck wasn’t my idea,” Otrando said. “I’m not smart enough to come up with that.

Almost immediately, donations started pouring in from all different places, from UMass alumni to friends to family to people who were just touched by Ketner’s story. Almost $9,000 were raised in the first six days and, as of Monday night, $9,903 had been raised in total.

Every day, Otrando said, Ketner is getting better. He said that last week he started gaining weight and that the tumor in his liver is shrinking. The two are also inspired by a woman in Milwaukee who recently beat Stage 4 colon cancer and they’re already talking about linking up and training together again this summer.

Wherever this goes, Ketner is thankful for all the support he’s received.

“If I don’t get another penny, I’m grateful, because that wasn’t something I was banking on happening when I got sick,” Ketner said. “I just wanted to get my story out there.

“My fight has actually been inspirational to people. People tell me that all the time, because they’re like, ‘You’re always smiling, you don’t even look sick, you’re fighting through this.’

Stephen Hewitt can be reached at [email protected] and followed on Twitter @steve_hewitt.