Go ahead, indulge yourself 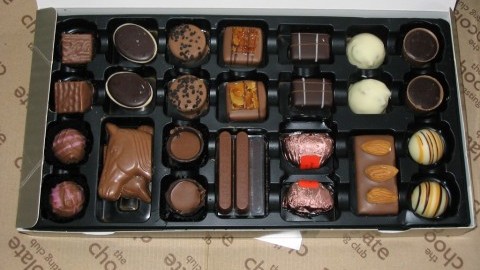 Forget what your dentist and your diabetic grandmother have always told you: Chocolate is, in fact, quite good for you. This timeless sweet has been making headlines in health journals over the last few years thanks to discoveries in terms of the cardiovascular benefits it provides, and consequently the collective American sweet tooth has been reignited with a vengeance. While the depraved restrictions of the megalith dieting industry would have us believe that even thinking about chocolate in the era of high blood pressure and bad cholesterol is tantamount to a cardinal sin, the fact is that chocolate is bursting with antioxidants and essential nutrients that are not nearly as destructive to your health as myths of candy-crunching pop culture insist.

While anything can be bad for you in excess, nutritional science has confirmed that consuming chocolate in moderate amounts is overall beneficial to heart, digestive and mental health. In case you ever needed more of an excuse to reach for the Hershey’s, here are some helpful health facts about chocolate to keep you happily indulged.

Despite being somewhat vilified as a sweet, chocolate is host to a bevy of heath benefits for the cardiovascular system. The cocoa bean, from which chocolate is derived, is rich in plant-based nutrients known as flavonoids that act as an environmental defense mechanism. The flavonoid in chocolate is known as flavonol and is found only in chocolates with a high concentration of cocoa, so if heart health is your intended goal, be sure to look for chocolates that have a higher cocoa percentage. In the body, flavonol acts as an antioxidant—a buzzword in the vernacular of health lingo that essentially translates to a neutralizing agent for toxins that might otherwise enter our body, which has been proven to improve circulation and thus maintain regular cardiovascular function. In more humorous terms, think of the flavonols in cocoa-rich chocolate as a small army battling to keep your heart pumping at normal capacity. Obviously this is not the case, but sometimes a cute visual helps.

Ever wonder why a box of chocolates is a staple of a breakup survival kit? It’s not just for the indulgence that a good bon-bon provides (although anyone who has ever been harshly dumped will tell you otherwise). Consumption of chocolate releases endorphins (one of the hormone-like chemicals in the brain linked with mood regulation), which explains the inherent happiness one feels when biting into a piece of chocolate. In addition, theobromine, the main alkaloid found in the cocoa bean, acts like a natural antidepressant when introduced to the human system because it also catalyzes the release of endorphins. So all those advertisements of smiling people eating chocolate are not entirely fabricated, because eating chocolate does in fact release the necessary chemicals to make you giddy.

It sounds ludicrous, but a reasonable amount of chocolate can in fact help you complying with a diet. Chocolate is a food rich in fiber, and as any health nut will tell you, it’s fiber that keeps you feeling full. Dark chocolate is typically better suited to these purposes than milk chocolate because it is less saturated with sugar and typically has a higher cocoa percentage. Instead of curbing your cocoa cravings entirely, try just occasionally snacking on small amounts as a quick pick-me-up or an afternoon treat to keep yourself in check, instead of hungrily binging on other snack foods to keep feeling satisfied.

As previously mentioned, chocolate is beneficial to cardiovascular health, and this is because eating chocolates helps increase the flow of blood throughout the body. Regulating blood pressure is a crucial element of a healthy lifestyle, and cocoa and chocolate have been proven to produce anti-clotting effects, much like aspirin, which aid in the flow of blood throughout the body. This boost of blood flow benefits more than just the heart. Increased blood flow to the brain has been linked with improvements in vision because it increases blood flow to the retina, which allows for more acute eyesight. A boost of blood to the brain also increases cognitive abilities and alertness, allowing for easier retention and processing of information and thus improved academic performance. If you’re feeling the pressure before that big exam, scarf a quick piece of chocolate to get your blood flow back on track and enjoy the endorphin release before academic stress sets back in.

Despite what your junior high health teacher might have told you, chocolate is not the ultimate destroyer of clear skin. In fact, much the opposite. Chocolate helps increase blood flow all over the body, which helps maintain the elasticity of skin and regulate the buildup of natural oils in pores. The endorphins released by eating chocolate help to significantly lower stress, and reduced stress hormones means less breakdown of collagens in the skin and thus a reduced chance of developing wrinkles later in life. Also, the flavonols found in chocolate help to guard your skin against UV damage and other free-flying toxins. Despite the myth of pimple-faced teenagers gorging on candy bars, chocolate is not nearly the enemy of clear skin that it is portrayed as. There is even a new fad in the beauty world that suggests using dark chocolate as a kind of cure-all mud mask. Though its topical benefits are debatable, the consumption of chocolate is certainly beneficial to the internal cultivation of external beauty.

Next time you’re feeling depressed or stressed or excessively hungry while on a restricted diet, a piece of chocolate may be just the remedy you’re looking for. Though it is undoubtedly delicious regardless of health context, the fact that it provides some benefits is certainly a good incentive to stock up in case of emergency. As with all things, moderation is key—too much of anything, even chocolate, can have unfortunate consequences. But as long as you aren’t consuming twice your body weight in bon bons every weekend, you should be fine with a little occasional indulgence.

Emily A. Brightman can be reached at [email protected]