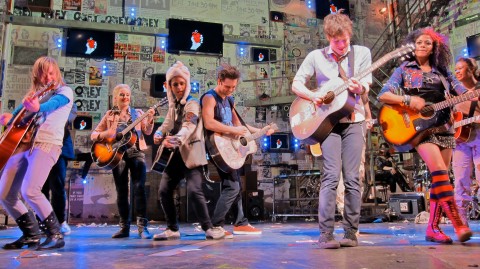 On Tuesday evening at the Fine Arts Center, the nearly sold-out musical “American Idiot” opened to reveal a wall covered from floor to ceiling with television screens. The screens lit up the theater with images from reality shows and American news clips about politics and celebrity culture before the cast launched into a powerful rendition of Green Day’s 2004 hit song, “American Idiot.”

The opening number made the production’s themes of rebellion and nonconformity very clear from the beginning. Throughout the play, the characters rebel against the American ideals force-fed to them through the media – with mixed results. While not conclusive, “American Idiot” sends a powerful message to America’s youth about their desperate need for individuality in the face of a society based on conformity.

Despite beginning their adventure together, the three main characters – Johnny (Jared Neptune), Tunny (Dan Tracy) and Will (Casey O’Farrell) – all part ways early in the play, which tells their stories through the music of Green Day’s 2004 album “American Idiot,” as well as some of the band’s later work.

The story centers mostly on Johnny, who escapes to the city and succumbs to a life of drug abuse. His story is often told through reflective letters that he writes to his mother, which he recites out loud to the audience. Emotions are wrought when Johnny opens a scene with the line, “Dear mom, today I shot drugs for the first time.” Throughout the rest of the production, the characters share the stage simultaneously while living out their lives separately. They fall in and out of love, make friends, try new things and, of course, always find a way to express their feelings through song.

Upon hearing the musical’s first songs, “American Idiot” and “Jesus of Suburbia,” a seasoned Green Day fan will note the difference between the actors’ Broadway-attuned vocals and those of Green Day vocalist Billy Joel Armstrong. However, the show’s theatrics make up for this discrepancy. Songs like “21 Guns” and “Wake Me Up When September Ends” begin with acoustic guitar and solo vocals that greatly contribute to the mood of these scenes while “Too Much Too Soon” and “Letterbomb” add some refreshing female vocals to the mix.

For the most part, the set does not change throughout the show, with only a rolling couch, beds and scaffolding used for each scene. The production uses props lightly; the most notable use is seen in the choreography for the song “Give Me Novacaine.” During the scene,  Johnny and his girlfriend “Whatsername,” played by Olivia Puckett, dance with the long elastic band Johnny uses to shoot heroin in a unique display of athleticism and flexibility.

The musical’s choreography is reflective of the angst and aggressive emotions of its characters. Head-banging and fist pumping, the cast run around the stage, often jumping and climbing on the set pieces with a nonchalance that makes the production look like an organized chaos. “American Idiot” also runs without an intermission, so its momentum is maintained throughout the entire hour and a half production.

One of the play’s most powerful moments is the cast’s performance of “Wake Me Up When September Ends.” During the song, all three main characters sing together as the rest of the cast performs a dance interpretation of America’s Sept. 11 tragedy. The song comes directly after the powerful all-female ballad “Letterbomb,” bringing the play back down to a solemn mood by reminding the audience of problems even greater than the characters on stage.

The cast of “American Idiot” is set to continue its national tour in Elmira, N.Y., and Portland, Maine, in the coming weeks before returning to Boston. After that, the company will continue with many more shows from Florida to California. Wherever the show goes, the music of Green Day will certainly continue to be brought to life in the provocative tale of “American Idiot.”