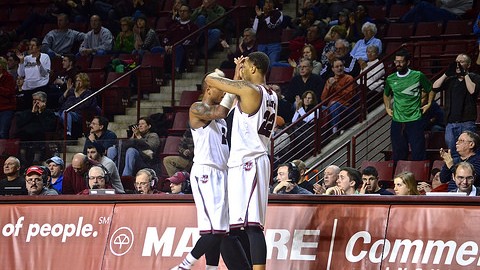 With Maxie Esho out of the lineup on Wednesday night, there was debate over whether or not the Massachusetts men’s basketball team would have the same energy level without him.

UMass quickly put those questions to bed, coming out in a frenzy, using the 4,345 fans in attendance at Mullins Center to pump itself up en route to a 79-67 win over La Salle.

“It’s something we always shoot for, to start the game well with high energy,” UMass coach Derek Kellogg said. “The crowd was very helpful, I thought, in helping us do that. I thought the way we practiced the last couple days and not being on the road was actually very nice, and not feeling like we were in planes, trains and automobiles for a couple days.”

Explorers’ coach Dr. John Giannini added that he could tell in warm-ups that the Minutemen looked ready to come out with a lot of energy.

Lethargic starts have cost UMass dearly in past games and have been a main reason why the team was in the midst of three losses in four games. The energy and competition level weren’t consistent throughout an entire 40-minute game in those contests, but the Minutemen made sure they came out ready against La Salle.

While UMass didn’t jump out to a huge lead early on, it did set the tone, both defensively and offensively, with its energy, coming away with huge blocks that led to fast-break points on the other end.

Raphiael Putney’s five blocks led all players in the game and was also a career-high for him. In total, the Minutemen had nine blocks that prevented the Explorers from establishing any offensive rhythm and continued to drive UMass’ energy level skyward.

“If we’re going to be good, he’s got to get 11, 12 rebounds, three or four altered shots, and two or three blocks,” Kellogg said.

The Minutemen had the mindset all week in practice that they were going to come out with more intensity and leave their bad stretch of results in the past. UMass did that and, according to Kellogg, the team can use this performance—and intensity level—to propel them forward in the home stretch.

“It was time to reset the deck,” Kellogg said. “They were ready, I was ready and then we all brought energy for a couple days and now I think we’re ready for this last push.”

Now the only question that remains for the Minutemen is to see if they can carry this performance and energy level onto the road. They head out to Rhode Island on Sunday to take on the Rams.