Job discrimination based on body modification is outdated 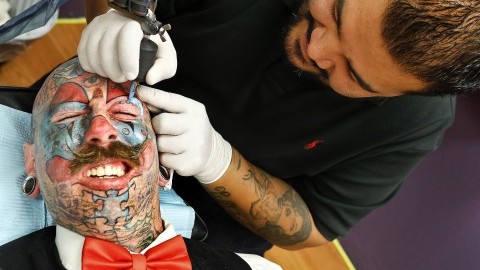 I can’t even begin to estimate how many jobs I’ve applied to whose dress codes included a phrase like, “No visible tattoos or piercings.” This mandate always rubbed me the wrong way for several reasons, but I think the most important reason is the perceived difference between a visible tattoo and a non-visible tattoo.

Employers want to put a face on their company that inspires trust and confidence in its clients. Fair enough. But what is it about a pierced or tattooed face that causes people to view the company in a negative light? The answer to this question is so outdated it’s embarrassing. We typically associate people who have visible body modifications with criminals, plain and simple.

We associate tattooed necks with prison inmates, tattooed biceps with motorcycle gangs, pierced lips with bullies and stretched ears with high school dropouts. This concept is, in itself, inherently flawed for several reasons.

The first reason is that these images of “dangerous people” – people who are intimidating, rude and unintelligent – are highly caricatured and for the most part, outdated. Fear of groups like this, largely representative of underprivileged demographics and also of counter-culture movements, has been exaggerated by (mostly white, middle-class) cultural paranoia.

This paranoia can be extended to countless other ways people express themselves through their bodies: Hair colors and styles, fashion, use of makeup and even women’s decisions to shave their body hair. Mainstream society is terrified of people who deviate from the social conventions of what people should look like, and, more relevantly, what professionals should look like.

Although body modifications like this may once have been more or less specific to these groups of people, they aren’t anymore. Today, the pierced and tattooed “demographic” is no longer just a demographic. Those who choose to alter their bodies in these ways are represented by countless careers, personalities, cultures, social circles and socio-economic backgrounds. Body modifications are no longer indicative of the stigmatized pseudo-criminal, if they ever were in the first place.

So how does our perception of individuals with these modifications change when the tattoos or piercings are not visible? Consider two potential employees with equal merit. One enters a job interview with a pierced nose (clearly visible). Another enters the interview with pierced genitals (obviously not visible). In a conservative environment, the potential employee with the genital piercing will, in all likeliness, be far better off. This is because the potential employer cannot see it and is therefore not confronted with the confusing paradigm of a qualified individual with a body modification. Note the sarcasm.

If we want to extrapolate this metaphor into a slightly more sinister context, here’s another example. Imagine an establishment that does not hire homosexuals, although employees are never asked about it in their interviews. Two potential employees are interviewed. Both are homosexual. The first makes no indication of it, and is hired. The second, on the other hand, is spotted holding the hand of their partner before the interview. This second person, given the company’s policy, is not hired.

But what is the fundamental difference between these two individuals? Nothing. Obviously this metaphor is not airtight, especially given the considerably more devastating social discrimination and aggression that homosexuals have experienced and still are experiencing, compared to individuals with body modifications. But you get my point.

Employers, and the general public, do not want to confront the conflicting cultural archetypes that our society has constructed, which cause us to look at people and judge them based on their appearance or demeanor. The concept of a lawyer, a teacher or a salesperson with stretched ears or tattooed knuckles conflicts with how we categorize our conceptions of people.

We love to put groups in Venn diagrams: In this instance, professionals on one side, people with body modifications in the other, a blank space in the middle. It is very difficult for us to rid ourselves of the paranoid misconceptions of past generations. But we must ask ourselves what the purposes of these misconceptions are. What do we stand to gain by continuing to allow ourselves and others to discriminate on the basis of physical appearance (and furthermore, by nationality, sexuality, gender or any other factor that is a common basis for discrimination)? We inhibit ourselves by inhibiting our understanding of other people – we prevent ourselves from learning about and benefitting from the unique perspectives of those who are different from us.