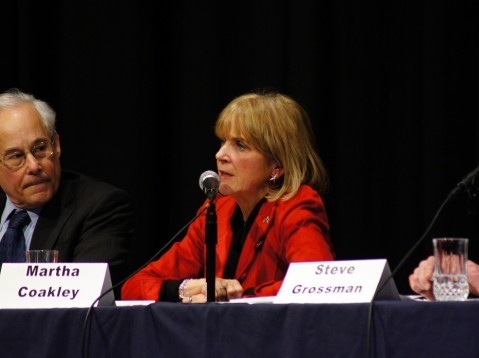 Massachusetts Attorney General Martha Coakley met with members of the Amherst community on Sunday at the Amherst Brewing Company, one of her first stops as she begins her bid for Democratic gubernatorial candidate.

The meet and greet was open to the public, offering voters the opportunity to get to know Coakley and her platform as well as voice their own concerns for the state.

According to a campaign schedule sent out to members of the press, she had spent all day at house parties in the area.

Coakley is a native of western Massachusetts, originally from Pittsfield and graduating from Drury High School in North Adams.

University of Massachusetts sophomore Kevin Osorio, a legal studies student, helped run the event as an intern for the campaign. When asked why he joined Coakley for Governor he said it was because of “her focus on pre-K for all public schools, which is an issue that is close to me personally.”

“It’s been a very interesting experience. So much to do, not that much time to do it,” he added.

Coakley spent the first half of the event meeting with people individually, answering questions and discussing campaign plans.

Later she was introduced as the “confident, passionate, governor we need” and spoke to the crowd for almost thirty minutes, opening her speech with congratulatory remarks for the crowd.

“Having folks who care about their communities is what will make government better,” Coakley commented.

Coakley focused her speech on the economy, public education and health care, all topics that she feels passionate about. She spoke on the possibility of improvement in those areas, focusing particularly on their impact in western Massachusetts.

“The economy needs to turn around for the whole state, not just Boston and Middlesex County,” she said.

Coakley has experience taking on big banks as attorney general for the state, “(making) sure we held big business and Wall Street accountable.”

“We do this for people who work hard and play by the rules,” she added, referencing the work her office has done in helping families fight the foreclosure of their homes.

Coakley said that Massachusetts needs more innovative industries to be based within the state, especially in places like the Pioneer Valley, listing technology and renewable energy as areas that may bring more jobs to the state.

On the topic of education, Coakely committed herself to “transforming our schools.” She said,

“Every child should have an education (and) every student who wants to study at a four year college ought to have the ability to do so,” she said

Coakley added, “As an education state, especially out here (with the Five College consortium), our students provide the foundation for the knowledge economy. We need to find a way to make college affordable; if we don’t, we’re cutting off our future.”

Coakley also mentioned her plans for early education, an extended school day and computer science curriculums, as well as retraining programs for adults wanting to reenter the work force.

Coakley also outlined her goals for improving health care, saying that she wants to move away from the fee-for-service system.

“We should treat depression in Massachusetts the way we treat diabetes and asthma,” she said, adding, “We are about enlarging everyone’s rights.”

Coakley ended her speech with a story about her father. Upon her graduation from law school he gave her a plaque with an inscription that inspires her to run for office today: “Sometimes the best man for the job is a woman.”