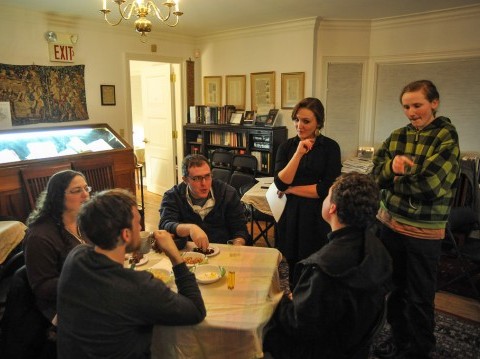 On Thursday evening, the University of Massachusetts Renaissance Center took a trip back to the 16th century for Shakespeare Trivia Pub Night. Five teams gathered in the fire-lit Reading Room to compete through seven themed rounds of trivia read by UMass senior Daniel Kadish and local theatre director Dori Robinson.

Chips, peanuts, cookies and other snacks were served along with various beverages and tea in the center’s own teacups.

The emcees requested that participants come up with team names. The five teams were “Team Scalywag,” “Slan Clan,” “The Tudors,” “Eliza Preston” and “Bard Goes Hard.”

The first round of trivia was titled “baby names a la Shakespeare,” which asked the names of Shakespearian characters based on the personality of a theoretical child.

“If you name your princess this,” read Kadish, “she might think she’s a little king.” For each round, teams received a sheet with ten blanks corresponding to the questions. Those who knew the correct answer fervently jotted down “Regan” on their papers.

“Make up anything if you don’t know the answer,” announced Kadish, successfully encouraging some humorous responses from the teams.

Robinson laughed and joked throughout the night, frequently high-fiving the participants and making comments on the trivia questions with Kadish.

“We disagree on this one so there may be two answers,” said Robinson about a multiple-choice question regarding Shakespeare’s Hamlet.

Arthur Kinney, the director of the Renaissance Center, watched the event and supplied his own answers at times to clear up various wonderings that arose about the Bard.

“It’s my job,” said Kinney simply when complimented on his knowledge.

A ten-minute break was taken halfway through the game during which participants were invited to take more refreshments as Robinson handed out a sheet titled “Batman or Shakespeare?”

The sheet contained a number of quotes and participants had to circle whether it was a line from one of Shakespeare’s plays or a quote from the fictional Batman universe.

After a break the emcees reviewed the answers and continued on to the next rounds, which included “Who What When Where Will” (in which participants answered historical questions about Shakespeare) and “Rap Lyrics or Shakespeare Line?”

At the end of the evening all the sheets were collected and scores were tallied while team members joked and conversed with one another about how they did. Some participants had experience in the theatre and English departments, while others commented that they had just enjoyed the guessing game.

When the results were in, Robinson reconvened the group to announce the winner: team Eliza Preston with 102.5 points. The team members were Elizabeth Drellich and Preston Thompson.

Drellich attributed the majority of the team’s success to Thompson, a sophomore with experience in performing arts.

The two winners received calendars and their choice of one prize from the “goody basket.” All other participants also received something of their choosing from the basket, which contained magnetic bookmarks, stickers, pens and notepads.

Robinson congratulated everyone and thanked them for their participation, voicing her happiness over the success of the Center’s first trivia night.

“My friends and I participate in a lot of these trivia nights,” said Robinson, “so I figured it would be fun to have one of our own.”

Robinson had recently directed Kadish, a theatre major at UMass, in “The Merchant of Venice” last spring. “I gathered some friends to see who wanted to geek it out and put together this trivia night,” she said, gesturing to Kadish and Alison Kiraly, the program director at the Renaissance Center.

Kinney and Kiraly also voiced their hopes that the success of the center’s trivia night would help spark more interest in the Renaissance Center among UMass Students. They encourage everyone to like the center’s Facebook page and attend more of the center’s events such as Shakespeare performance workshops with Robinson. More of these events can be found on the center’s website as well.