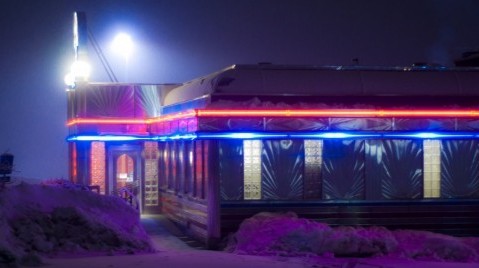 The Route 9 Diner, beloved by college students throughout the Pioneer Valley, celebrated its 10 year anniversary in December, and owners Chris Karabetsos and Archie Sideris reflected on their memories and the changes that they have noticed over the years.

Karabetsos bought the diner in 2003 and took on Sideris as a partner a year later.

“We were close friends for a long time, we were both in transition, we were looking for a business and we came together. This was available and we fell right into it and haven’t looked back since,” Karabetsos said.

The two recall one of their biggest challenges: getting the locals to form a new opinion of the diner. The previous owner had a bad reputation with the local community, and, according to Karabetsos and Sideris, it took some time for the two of them to gain their trust.

“We had a really tough time in the beginning because whoever owned this before, (the locals) thought it was (the same owner). It took us five years to get that name out of here,” Sideris said.

“That was a hump it took us a while to get over,” Karabetsos added.

Initially, the diner was only open on the weekends for 24 hours, and would close for approximately an hour to prepare for the following day. Soon after they took over, Karabetsos and Sideris decided to operate the diner 24/7, and it has been running that way ever since.

“I think we have gotten busier and busier every year, and I think that’s the locals getting used to us and coming to us We’ve really attracted customers that are loyal to us,” Karabetsos said.

Their initial goal was “to be the go-to place for locals and college students,” Karabetsos said.

“We (were) trying to get them to mingle at the same time,” Sideris said.

According to the two, they think that they have now achieved that balance.

Additionally, the flow of business has evolved over time. UMass’ decision to move football games to Gillette Stadium was a blow to the diner, the owners said. Karabetsos and Sideris have also noticed a decline in business during the late-night hours since they took over. The owners attribute this change to UMass offering more dining options and events on campus, as well as increased caution against drunk driving.

One of their favorite memories from the past 10 years is the May Day celebrations on May 1.

“The first time we encountered it, there (were) 100 people coming in here dressed up and they (were) dancing in the parking lot, reenacting stuff. It’s something we never expected, and kind of turned into a tradition, so it was kind of cool,” Karabetsos said.

“We’ve met so many people here throughout the years and they’ve become friendly with us. We’ve seen them every day now for at least eight, nine years. They’ve become part of our family now. I see them just as much as my family,” Karabetsos said. “If not more,” Sideris added.

The Route 9 Diner menu has continued to evolve. The diner is known for its Greek food in particular, but it offers a wide selection of other options as well. One of the most popular items is the moussaka, Sideris said. Other meals include a variety of salads, sautés and seafood.

“We even get people come in and tell us too, they can’t even get (this) salad at a high-class restaurant,” Karabetsos said. “It makes us feel good in that respect, that we can put out something (that) someone might get at what they might consider a more upscale place. And we can do the same thing for them, just at a better price. We just don’t have linen napkins on the table, you know, that’s it.”

As for their plans for the future, the owners want to keep improving the menu while also increasing their local suppliers.

Malea Ritz can be reached at [email protected]