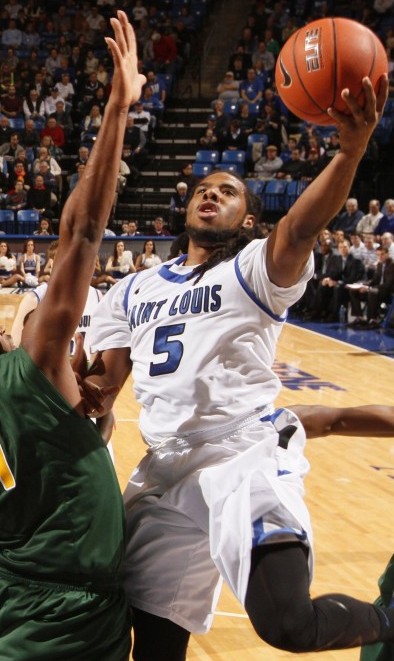 Jett finished with a game-high 25 points and scored 19 of the Billikens’ (22-2, 9-0 Atlantic 10) final 24 points of the game. Fellow senior Dwayne Evans chipped in with 14 points and senior Mike McCall Jr. added eight.

Explorers (12-11, 4-5 A-10) junior Jerrell Wright tied his career-high with 21 points, while junior Steve Zack registered his 13th double-double of the season, finishing with 15 points and 13 rebounds. Senior Tyreek Duren hit a clutch 3-pointer with 33 seconds left, but his 14 points were not enough.

Both teams couldn’t get anything going from 3-point range, with the Billikens hitting only two of 13 shots from beyond the arc, and La Salle converting on two of eight.

Saint Louis will return home Saturday afternoon for an A-10 showdown with VCU, while the Explorers look to avoid losing their third straight game Saturday when they host Saint Joseph’s.

The Hawks (16-7, 6-3 A-10) have won three of their last four games, with the one loss coming against Saint Louis. They received another great performance from freshman DeAndre Bembry, who ended the game with 18 points and six rebounds, earning him A-10 Co-Rookie of the Week honors.

Senior Halil Kanacevic, who leads St. Joe’s with 8.7 rebounds per game, finished with game-highs of 10 rebounds and seven assists, to go along with seven points.

Four players finished in double figures for the Rams (19-5, 7-2 A-10), including a 17-point performance from senior forward Juvonte Reddic. Sophomore Melvin Johnson ended the night with 14 points, junior Treveon Graham had 13 and Briante Weber added 11.

Leading by eight at halftime, the Hawks increased its lead by as many as 13, but VCU went on a 10-0 run late in the second half, cutting the lead to 63-60 with just two minutes, 56 seconds left.

Following a bucket by each team with just over a minute left, St. Joe’s closed out the game by hitting four free throws to make it 69-62.

The Hawks will be back in action when they take on rival La Salle this Saturday, while the Rams face a crucial home contest this Wednesday when they take on George Washington, which is also 7-2 in the conference.

George Washington remained undefeated at home this season, beating Fordham easily by a score of 93-67.

Graduate student Maurice Creek was one of four players to finish with double-figures for the Colonials (19-4, 7-2 A-10), leading the way with 20 points. Sophomore Patricio Garino finished with 18 points, senior Isaiah Armwood had 16 and sophomore Kevin Larsen chipped in with 14.

Rams (9-13, 2-7 A-10) senior Branden Frazier scored a game high 23 points and sophomore Mandell Thomas had 18 points to go along with six rebounds.

George Washington got off to a fast start, jumping out to a 20-5 lead seven minutes into the game. The half came to an end with the Colonials leading Fordham 56-33, shooting an astonishing 76 percent from the field.

Next up for George Washington will be a trip to VCU this Saturday, while the Rams will host St. Bonaventure this Wednesday.