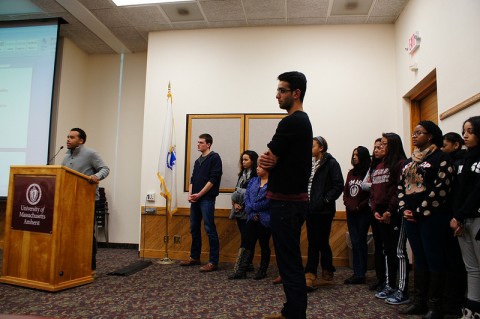 The University of Massachusetts’ Student Government Association is setting new goals for this semester, including taking steps to give students more of a say in what goes on around campus.

According to SGA President Zachary Broughton, work is being done to ensure that the student voice is heard. The SGA is working with the Graduate Student Senate and UMass Chancellor Kumble Subbaswamy to create advisory boards to the different vice chancellors across campus in order to improve relations with students, as well as the SGA’s ability to communicate with administrators.

“This is one of the most active groups of senators we have had in the past four or five years,” SGA Speaker Sionan Barrett said.

The SGA is also working to keep UMass affordable for students. It is currently supporting a proposed bill to increase the state budget of UMass, which would freeze tuition and fees for a second year in a row.

“On March 5, the SGA will be hosting our annual lobby day in which we take busloads of students from UMass Amherst and other public institutions of higher education within the Commonwealth of Massachusetts to the Massachusetts Statehouse, and we lobby legislators to increase their funding to the University,” Broughton said.

Another goal of the SGA is to create a “joint task force” of student leaders to work on getting a new Student Union.

“The semester is going really well so far,” Broughton said. “As of right now, the SGA is off and running. Members of both the Executive Cabinet and the Senate are pursuing their own and collective projects that we hope will enhance the overall undergraduate experience.

The SGA is also promoting “Minuteman Mondays,” during which SGA members will wear UMass attire. Students and faculty are encouraged to participate as well. The hope is that “Minuteman Mondays” will generate more school pride and instill a new tradition.

“Collectively, we are not just a large research institution but more importantly, we are a talented, creative and innovative community that has never been afraid to lead or stand up for what is right,” Broughton said.

The SGA’s Diversity and Student Engagement Committee is also working on a “5 Trustees Campaign” to encourage the Massachusetts legislature to vote on increasing the number of voting trustees from two to five. Each of the campuses in the UMass system has a trustee, but only two have voting rights each year.

“I am ecstatic about how the senate has been doing this semester,” Barrett said. “Every single senator has an action plan to improve this university, little by little. From green computing, to improving logistics of the YCMP plan, to lowering the costs of internship credits, to making new traditions like ‘Minuteman Monday,’ our senators are contributing to this campus in a big way.”

Next month, elections for SGA President, Vice President and the Student Trustee position will take place.