Slow start dooms UMass hockey in loss to No. 12 PC 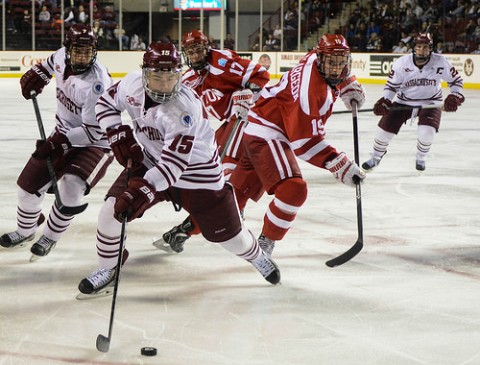 PROVIDENCE, R.I. – Not too long ago, the Massachusetts hockey team’s goals seemed realistic.

The Minutemen were in a back-and-forth fight with Notre Dame for a home playoff game, and even had an outside chance at a first-round bye in the Hockey East Tournament.

UMass has a bulletin board in its locker room with the conference standings on it. So each day as they prepared for practice, the Minutemen knew where they stood and knew what it took to reach their goals.

Four games later, that’s all over.

UMass suffered its fourth straight loss on Friday with a 4-3 letdown to No. 12 Providence at Schneider Arena, eliminating any chance of another game at Mullins Center after Saturday’s regular season finale.

“You definitely want to get home ice, whether it’s a top five seed or a six, seven or eight, that was the goal at the beginning of the year and obviously we didn’t accomplish that,” said co-captain Troy Power, who returned on Friday after missing the last three games with a knee injury.

The Friars, on the other hand, ended their five-game winless streak with four different players finding the back of the net and a 30-save effort by goaltender Jon Gillies.

UMass was done in by poor play in the first two periods. The Minutemen were outshot 27-10 and took six penalties through the game’s first 40 minutes to fall in a 4-1 hole.

“(Providence) funneled the emotion of Senior Night and jumped on us from the start, and we weren’t ready to respond to the limited time and space (Friday),” UMass coach John Micheletto said.

It was the fourth straight game that the Minutemen found themselves at an early disadvantage and once again affected the final score, something Power said is a result of the team’s effort in practice.

“You never want to dig yourself in a hole and we’ve done a good job of that these last couple of games,” he said. “Coach mentioned that it stems from practice and there’s been some times in the last couple weeks where we haven’t come out ready for practice and that carries over into the game.”

UMass entered Friday’s game coming off a 5-4 loss to Northeastern which it rallied from a 5-1 deficit in a six-minute span. The Minutemen gave the Friars (16-9-6, 8-7-2 HEA) a scare as well Friday night, cutting a 4-1 third-period deficit to 4-3 with less than seven minutes to play on goals by Steven Iacobellis and Michael Pereira. But the comeback bid fell short thanks to the play of Gillies down the stretch.

Iacobellis cut the Providence lead to 4-2 on a rebound off a shot by Branden Gracel at 8:39 in the third period, becoming the first UMass freshman to record a 20-point season since Pereira did so in 2010-11.

Pereira made it 4-3 at 13:19 on the Minutemen’s third power-play goal of the game. Conor Sheary passed to Pereira in front of the net and the senior put it past Gillies with the forehand. Sheary’s assist extended his point streak to eight games.

UMass had multiple chances to tie the game, outshooting Providence 23-8 in the final period, but got Gillies’ best effort in goal down the stretch and couldn’t overcome the early hole it dug itself.

Providence struck first three minutes, 21 seconds into the first period when Nick Saracino found Kevin Hart in the slot with a pass from the corner for a one-timer to beat goaltender Steve Mastalerz (31 saves) for the 1-0 lead. The goal came with the extra-attacker after Mike Busillo took a roughing penalty in front of the net seconds earlier.

The Friars doubled their lead at 10:37 when Brandon Tanev scored a lunging goal past Mastalerz off the 2-on-1 led by Noel Acciari, who was credited with the assist. Derek Army forced a turnover in the neutral zone and found Acciari on the break for the odd-man rush and the 2-0 Providence lead.

Branden Gracel scored a power-play goal from in front at 17:24 to make it 2-1 after the first period, but Acciari scored to give the Friars a 3-1 lead 11:20 into the second. Paul de Jersey found Acciari camped out in front of the net, fed him the puck down low and the redshirt sophomore forward jammed it by the outstretched pad of Mastalerz after multiple attempts on net.

Mark Jankowski extended the Providence lead to 4-1 after two periods when he came out on the rush and ripped a shot past Mastalerz from the right circle.

“Not a very good 40 minutes of hockey for us,” Micheletto said. “You can’t play 20 in this game and expect to get good results. We got punched in the mouth in the first five minutes and never had a response, and were too slow-building from there.”

The Minutemen close out the regular season with a 7 p.m. contest against the Friars on Saturday for Senior Night.