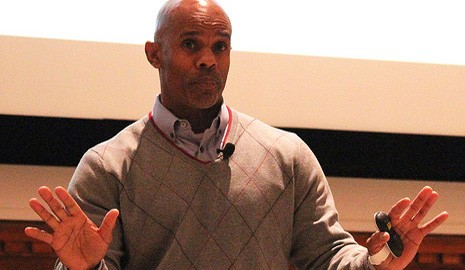 Ted Bunch, an internationally-recognized educator and activist on ending violence against women, spoke to UMass students on Thursday about challenging social norms and redefining manhood in today’s society.

As co-founder of A Call to Men, a national movement focused on the prevention of domestic and sexual violence towards women, Bunch offered insight into “healthy masculinity.” In his talk, he allied his own organization with V-Day, a global movement to end this violence, which has been gaining awareness on college campuses for the past 15 years.

The main focus of the talk involved inspiring men to break stereotypes and re-analyze the way they view their identities as men. He stressed the role of men in preventing violence against women. Bunch used personal accounts, academic research and engaging conversation to connect with students.

Often throughout the talk, he surveyed the crowd by asking questions related to gender stereotypes and the way men typically view women today. In this way, he explained socialization and how it impacts all of us, especially young adults, on such a significant level.

He initially described a hypothetical situation of a six-year-old boy playing football who is told at a young age that he “plays like a girl.” Bunch then discussed not only how this statement places women on an inferior level, but also how it reinforces social discrimination against girls and women. He furthered the analysis of male socialization by describing how boys are expected to be tough and “be a man,” while never showing their weak side. Because of these harsh expectations, Bunch argues, males suppress emotions at a young age, which heightens their frustration later on in life.

In recognition of this talk, UMass is holding another event, “Are You Man Enough to Talk About Masculinity,” a conversation on fostering healthy masculinity in the UMass community. In conjunction with Massachusetts White Ribbon Day, this effort will take place on March 6 at 7 p.m. in the Commonwealth Honors College Residential Community Events Hall, and is open to the public.

The event, held in the Student Union Ballroom, was sponsored by multiple organizations on campus, including the Center for Health Promotion, Center for Women and Community, Center for Counseling and Psychological Health, Center for Multicultural Advancement and Student Success, Office of Religious and Spiritual Life, Office of Fraternities and Sororities, Stonewall Center, Dean of Students Office, Residential Life, Student Government Association, Athletics, UMatter at UMass, Hampshire College, Amherst College and the Northwestern District Attorney’s Office.

Julia McLaughlin can be reached a [email protected]