Trey Davis shows the future is bright for UMass basketball 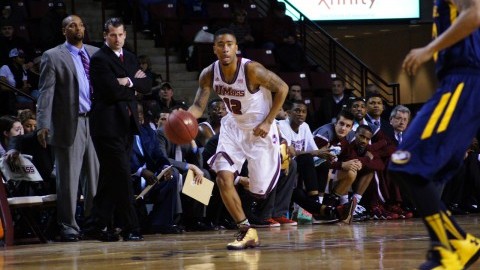 He’s one of 13 players on a Massachusetts men’s basketball team that boasts charismatic personalities that tend to draw more attention than the often-quiet Davis. So, it comes as no surprise that when he’s on the court, fans tend to overlook him, until one of his distinct 3-point shots goes up and, more often than not, in.

The sophomore lets his play do the talking and so far this season, it’s spoken in a big way. After averaging just over three points per game as a freshman last season, Davis is one of the first players off the bench for Derek Kellogg’s Minutemen. He’s averaging over 22 minutes per game and is sixth on the team in scoring, with 8.6 points per game, a huge jump from last year’s output.

“It’s really a matter of (Kellogg) letting me play this year,” Davis said. “Last year he had me on a string and it’s hard for a player to play like that. And I’m a sophomore now, so he’s kind of letting me do what I know how to do. … It’s just the fact that he has more confidence in me now.”

Davis has always been known as a shooter. His 39 percent 3-point percentage leads all UMass players who’ve attempted more than five 3-pointers. But, it’s his growth and maturity as a player and floor general that has been the most noticeable, something that he attributes from having the chance to learn from one of the nation’s best point guards in Chaz Williams.

“Just coming here and being able to practice against him everyday is going to help me in the long run,” Davis said. “I mean, not too many people are going against a Wooden Award list type of point guard. I just talked back home with my family and they said I need to take advantage of this because not every kid has a chance to play against him every day.”

Davis has taken advantage of that opportunity and it has paid dividends for the Minutemen. But, as this season hits the final stretch and Davis’ role continues to grow, it’s easy to wonder  “what if?” with his career in Amherst.

A native of DeSoto, Texas, Davis had no intentions of playing college basketball at UMass. In fact, he originally signed with Atlantic 10 rival George Washington. But after coach Karl Hobbs was fired, he was granted his release and it was back to looking at schools that would be a good fit for him.

Patrick Washington – Davis’ coach at Woodrow Wilson High School –  had a good relationship with Kellogg and it was constant conversation between the two that ultimately led to Davis signing with the Minutemen.

“I had known Trey’s high school coach and some of the people in Dallas that knew (Davis) and thought he would be really good in our set up and what we needed,” Kellogg said. “It looked like he had a knack for really knowing how to play and try to win games, which are qualities that I like in our guards.”

Davis was officially going to UMass, but still had to wait a year to don the maroon and white. He wasn’t cleared to play for the Minutemen out of high school and had to go to prep school for a year in order to obtain eligibility. He attended Vermont Academy, and it was that one season outside of the Dallas area that may have been the most beneficial for him.

“I think the year of being in prep school and moving around helped him mature and get acclimated to being outside of the Texas area,” Kellogg said.
After a development year at Vermont Academy, Davis was finally ready to play Division I basketball for UMass. But after making so many positive strides the year prior, his freshman season was full of growing pains and limited playing time.

Entering the 2012-13 season, it was obvious that Davis still had a lot to learn. After all, the college game was much different from high school and prep school basketball. But the development of Davis’ game seemed to hit a standstill. His playing time was limited due to the plethora of guards on a Minutemen squad with lofty postseason expectations.

Known as a shooter out of high school, Davis took advantage of his minutes, shooting 44 percent on 3-pointers, and caught the eye of his mentor, Williams.

“He’s just tough as nails,” Williams said. “The kid doesn’t back down. From day one, he came to school; he came here and was up for the challenge. He challenged me and pushed me every day in practice.”

Despite playing most of his minutes at point guard, Davis still struggled to manage the game.

The offseason was going to be key for his growth as a player. He always had the confidence when it came to offense, but if he was going to become a starter one day, he needed to learn how to manage the game better.

His work over the summer has shown so far this season, to both his teammates and the coaching staff. It was apparent right from the beginning of practices in October that Davis’ basketball mind got stronger and he now had what it takes to lead the team.

“I think he’s gotten stronger and tougher and he’s gotten more mature on the floor; better command of the game,” Kellogg said. “He plays with a pretty good air of confidence in him, which makes him better than his natural talent.”

A look at the future

The 2013-14 season looked promising for Davis, but with Williams returning for his senior season and sophomore transfer Derrick Gordon in line to start as well, Davis’ time to shine would have to wait. He once again found himself coming off the bench in games and still seemed rough around the edges.

The Minutemen got off to a phenomenal 17-1 start to the season, rising all the way up to No. 13 in the AP Poll. Still, even with a dream season taking place, it wasn’t that far-fetched to think that it could only be a flash in the pan. After all, UMass is graduating three of it five starters at season’s end, with the most notable being Williams.

With no idea what the future holds, it was important for Davis to show what he could bring to the table next year by putting it on display this year.

“I think he’s starting to play with the confidence that you can see next year and the year after,” Kellogg said. “It’s nice to know that we have enough going forward that we can do some things, not only this year, but for years to come.”

Davis’ leadership was on full display in two distinct situations this season. The first breakout performance came on Dec. 28 against Providence. With Williams fouled out and the game close, Davis ran the offense, both down the stretch and in overtime, helping the Minutemen pull out a 69-67 overtime victory. He finished the game with 12 points and three assists in 27 minutes of action.

“I think that was a great experience for him, being able to command the floor and do what Coach wanted him to do,” Williams said.
His second shining moment came almost a month later, only this time the situation wasn’t as pressure-packed.

In the midst of a blowout against Fordham, Davis was asked to play point guard to finish out the game. With UMass up by over 30 points, Kellogg pulled all of his starters, forcing Davis to lead a group of freshmen and inexperienced bench players to close out the game. And while his command of the game doesn’t necessarily get reflected in the outcome of the game, a 90-52 win, his maturity showed.

Davis finished with 13 points and nine assists in 28 minutes, successfully leading the bench players on offense and defense, with the team seemingly not missing a beat.

“I basically came from the back of the bus to the front of the bus,” Davis said with a laugh. “I’m really like one of the youngest that plays on this team, so when I was with them, even though I was a young sophomore, I still gotta lead them because that’s what (Kellogg) wants me to do.

“That was fun. Making calls and commanding people. Just getting ready for next year.”

Davis has come into his own this season and while it’s going to be hard to follow in the footsteps of one of the best players to every play for the Minutemen in Williams, Davis is up to the challenge.

Davis is a shooter. All he needed was a shot this year to prove his worth. Like so many times in games this season, he made it count.

Confidence in Davis continues to grow amongst the team, with a bright future in the cards for the heir-apparent to Williams.

“I think he’s gotta good ceiling,” Kellogg said. “He’s going to continue to get better as he figures the college game out more and more.”