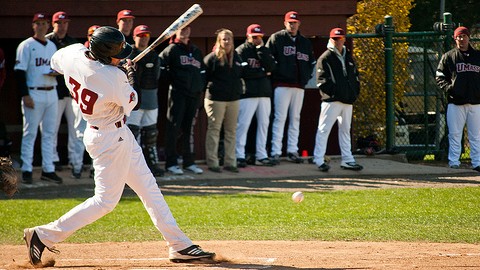 Here in snowy Amherst, it’s hard to imagine that baseball season is near. In fact, when you look outside and see the two-plus feet of snow on the ground, it’s almost impossible to envision the crack of a bat or the pop of a catcher’s mitt.

But down in Cary, N.C., the weekend forecast calls for sun and 70 degree temperatures.

And that’s where the Massachusetts baseball team will open up its 2014 baseball season. With a three game series against Army, UMass will get its first chance to put a forgettable 14-31 record in 2013 behind it.

There are several ways to look at that season. One would be to look strictly at their record and declare the season a failure. Another is to look at the Minutemen’s 7-14 record in one- and two-run games. As any statistician will tell you, this indicates that they were victims of some pretty bad luck. A couple breaks, and that record in close games could easily be reversed.

Nobody is predicting that UMass will completely turn its record around, but some better luck and a solid returning cast means that there could be some improvement.

“I’m excited about the experience we have coming back in our lineup,” UMass coach Mike Stone commented. “Everybody worked hard in the offseason, and we have some freshmen who have come in and established themselves.”

The Minutemen bring back several of their top hitters from last season. Third baseman Nik Campero hit .305 and tied for second on the team with nine doubles. Outfielder Adam Picard hit .300, bashed four home runs and had 31 RBIs. First baseman Dylan Begin also hit four homers and led the team in slugging at .476.

On the mound, right-hander Andrew Grant and lefties Conor LeBlanc and Aaron Plunkett all return after throwing at least 60 innings each last season.

One player who notably won’t be returning is second baseman Rob McLam. After leading the team last year with 55 hits and a .311 average, McLam will be sitting out the season with a medical redshirt as he recovers from a torn ACL.

“Rob was our best hitter the past two years,” Stone said. “We’re going to miss him.”

Stone said that Picard or Begin will likely occupy the third spot in the batting order, where McLam started all 45 games last year.

On the other side of the injury front, the Minutemen will get redshirt junior outfielder Kyle Adie back after he missed the entire 2013 season. Adie stole 16 bases in 16 attempts in his last full season and scored 25 runs, good for second on the team.

“Kyle is an exciting player with lots of speed,” Stone said. “He makes things happen at the top of the lineup.”

UMass starts the season on Saturday against an Army team that has already played its first series of the season. The Black Knights went 1-2 against William & Mary last weekend.

The series kicks off Saturday at noon with sophomore Brandon Walsh getting the start for UMass. Ryan Moloney will start the second half of the doubleheader at 3 p.m.

Ross Gienieczko can be reached at [email protected] and followed on Twitter @RossCollegian.