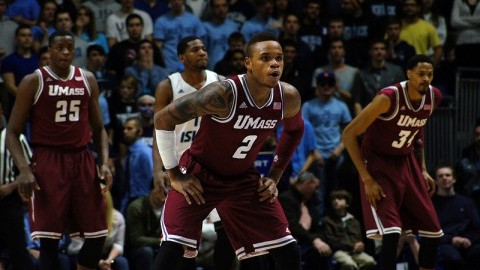 The last time the Massachusetts men’s basketball team played George Mason, it needed some last-second heroics to avoid getting upset.

It was Derrick Gordon’s putback with eight seconds left that propelled UMass to victory after erasing a five-point deficit with 41 seconds left back on Jan. 15.
The Minutemen (19-4, 6-3 Atlantic 10) will now try to avoid getting put in that situation in the first place when the two teams meet again Wednesday night at Mullins Center.
And UMass coach Derek Kellogg knows the Patriots (8-15, 1-8 A-10), who are coming off winning their first-ever A-10 conference game, will be hungry to avenge that first loss to UMass.

“They’re a team that is definitely still playing,” UMass coach Derek Kellogg said. “They’re still committed to trying to get better and trying to win games and we’re trying to do the same thing.”

UMass was ranked No. 16 and the Patriots were looking for their first conference win – the game proved to be one of the best of the A-10 season thus far.

Sherrod Wright and Bryon Allen led GMU by combining for 47 points and knocked down big shots when the Patriots needed them. Their performance was one that Kellogg took note of and knows that minimizing their quality looks on Wednesday will play a major role in the Minutemen coming away with the win.

“Bryon Allen and Sherrod (Wright) both had great games against us the first time,” he said. “In this conference, a lot of times, every game out is going to be a good group of guards that can really play. We’re going to have to lock in and make the game hard on them.”

Maybe the most important thing to come out of that game was the strong play from Gordon. He initially suffered what appeared to be a back injury in the second half after he hit the floor hard and rolled around for several seconds in pain. But, after returning late in the half, Gordon found himself in the right place for the game-winning shot that earned his team the win.

“I’m tough-minded and a warrior,” he said. “Because when I hurt my back, I thought I was done. There was so much pain and stuff and just for me to walk it off and come back and hit the game-winner, I would’ve never thought that would’ve happened. So it was special.”

It may have been the most defining moment in Gordon’s short career at UMass, one that has seen him struggle early on, but really turn it on of late.

In the last three games, Gordon is averaging 14.7 points per game, a significant improvement over his season average (9.0). But, perhaps more importantly, he’s settling into his role on the team.

“I struggled in the beginning, I definitely did,” he said. “But, right now, I’m just at a time that I’m glad that it’s happening now. Better late than never. It’s just fun me being able to do the things that I’m doing right now that a lot of people expected me to do at the beginning of the season.”

Gordon’s confidence and play has taken off since the game-winner. And it’s something Kellogg hopes will continue into Wednesday’s game.

“He’s really committed himself to what the team needs him to do to win, which is be an absolute ball-hawk on defense, creating plays and he’s scoring the ball now,” Kellogg said.

Wednesday’s game is set to begin at 7 p.m. at Mullins Center.